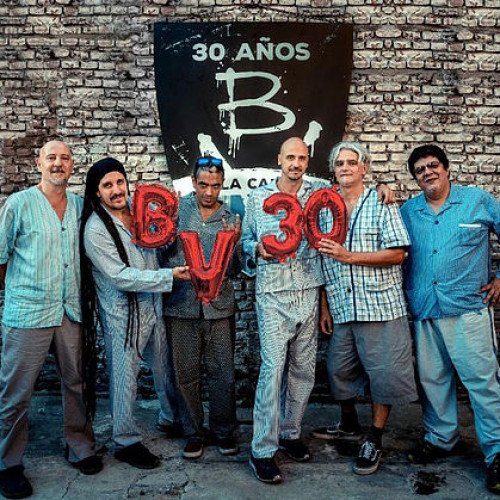 Bersuit Vergarabat is an Argentine rock band that formed formally in 1987. The previous name of the band (from 1987 to May 1989) was Henry y la Palangana. By the end of 1989, the band will change name several times, adopting nonsensical names like "Ernios of arcabio", "Aparrata Vergi", "Seria Soneub" (Buenos Aires spelled backwards); but eventually settled on "Bersuit Vergarabat Van de ir" then keeping only "Bersuit Vergarabat" its most iconic name. After two albums of underground transgressor rock, the band began to experiment with Latin American rhythms such as cumbia, chacarera, candombe and cuartetazo. The lyrics, though, remained acid and critical with regard to political and social problems. The current formation is Alberto Verenzuela (vocals, guitar, harmonica), Daniel Suárez (vocals), Germán Sbarbati (vocals, charango), Juan Subirá (keyboards, accordion, vocals), Pepe Céspedes (bass, vocals, guitar) and Carlos Enrique Martín (drums, percussion); previous members include: Gustavo Cordera (vocals), Charly Bianco (guitar, vocals), Marcela Chediak (percussion), Rubén Sadrinas (vocals) and Oscar Righi (guitar). In honor of Buenos Aires's José Tiburcio Borda Psychiatric Hospital, the band often performs in clinical pajamas. Although there is no truth to the urban legend of Cordera spending some time in that institution, the band has demonstrated an affinity for everything related to madness and marginalization. In addition to finding success in the Buenos Aires' underground movement, and then nationwide, Bersuit Vergarabat has attracted fans from many countries in Latin America as well as Spain and United States. The band's success beyond Latin America hinges largely on their ability to constantly reinvent themselves, as with their late 1990s venture into reggae music, popular in the United States at the time.

Great rock band 50 %
50 % They are no better than Babasónicos 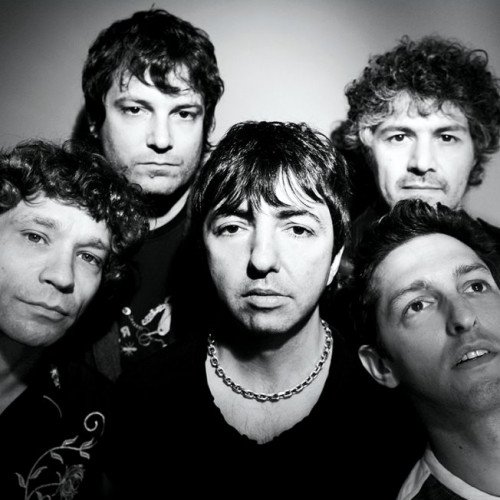 Babasónicos is an Argentine rock band, formed in the early 1990s along with others such as Peligrosos Gorriones and Los Brujos. After emerging in the wave of Argentine New Rock bands of the late 1980s and early 1990s, Babasonicos became one of the banner groups of the "sonic" underground rock movement in Argentina in the late 1990s. The band name refers partly to Sai Baba, the Indian guru, and partly to The Jetsons, whose Spanish version is called Los Supersónicos. The lead singer Adrián "Dárgelos" Rodríguez and the keyboardist Diego "Uma-T" Tuñón initially decided to create a new style, which wouldn't follow the established Argentine music. The other official band members are: Diego "Uma" Rodríguez (guitarist and lead singer), Diego "Panza" Castellano (drummer), Mariano "Roger" Domínguez (guitarist), and recently deceased Gabriel "Gabo" Manelli (bassist). For their second album, Trance Zomba (1994), they incorporated a guest DJ, "DJ Peggyn" who would eventually remain as a band member until after releasing Miami (1999). This same year the band saw the departure of their longtime manager Cosme. In 1999, they collaborated with Ian Brown on a song that bears their name on his album Golden Greats. In 2001, the band released Jessico, their most commercially successful and critically acclaimed album up to that point, reaching a broad mainstream audience with singles like "Los Calientes", "El Loco" and "Deléctrico".[1] The following records, Infame (2003), Anoche (2005) and Mucho (2008) continued with a streak of critical praise and commercial successful, each one being selected by several media outlets as one of the best Argentine albums of their respective years. [2] Babasonicos also composed the soundtrack for Vera Fogwill's movie Las Mantenidas Sin Sueños (Kept and Dreamless), which was released in 2007. The album was composed in 2003. On January 12, 2008, the band posted an entry on their official site in which they informed that their longtime bassist, Gabriel Manelli had died as a result of Hodgkin's disease, which he had been suffering since the tour supporting the album Infame. Multi-instrumentalist and long-time friend Carca joined the group in replace of Manelli in their 2011 album A Propósito. [3] They release their latest album "Discutible", in 2018.