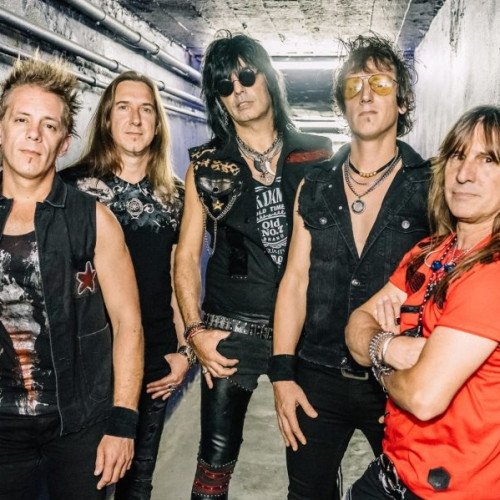 Rata Blanca (White Rat in English) is an Argentinian heavy metal band, formed in 1986. It is considered the most famous metal band in Latin music. he guitarist Walter Giardino replaced Osvaldo Civile in V8 for a little time, and left the band when his songs were rejected. His friend Roberto Cosseddu, bassist of Kamikaze, helped him to record a demo tape with those songs. The drummer Gustavo Rowek, who had also left V8 a short time before, declined his projects with Civile and joined Giardino. The session musicians Rodolfo Cava (singer) and Yulie Ruth (bass player) completed the line-up that recorded the demo. The songs were "Chico callejero", "Rompe el hechizo", "Gente del sur" and "La bruja blanca". Seeking stable members, the band took Saúl Blanch as singer, who was working in the hard rock band Plus. They met the bass player Guillermo Sánchez with the help of Giardino's friend Sergio Berdichevsky, member of WC at that point.[1] Rata Blanca made their first concert on August 15, 1987 in the Luz y Fuerza theater. Saúl Blanch left the band, and he was replaced by Carlos Périgo, who composed the song "Días Duros". Périgo left the band soon after that. Rodolfo Cava returned for a brief time, and Shito Molina got ill and could not sing anymore. As the band was about to record their first album and needed a singer immediately, Saúl Blanch returned to the band and helped record it. The album Rata Blanca was released in 1988, with nine songs.[1] On that year they took part in the "Halley en Obras" concert, along with Alakrán, JAF and Kamikaze. Polygram requested that the band could create an album which would have high sales in the first semester to renew the contract, and the band made fourfold the required number of sales. The keyboard player Hugo Bistolfi joined the band in 1989, and the singer Adrián Barilari replaced Saúl Blanch. The band subsequently made their second album Magos, espadas y rosas, which contained the popular songs "Mujer amante" and "La leyenda del hada y el mago". It was a successful release, and in its wake the band appeared in the TV show Ritmo de la Noche, and played in cumbia concert halls because typical rock venues could not accommodate their large audiences.[1] The album was followed by "Guerrero del Arco Iris", and a concert at the José Amalfitani Stadium. The band ended their contract with Polygram recording a live album, made at the Opera Theater with an orchestra,[2] but this album was released years later. Once in BMG they made an EP called "El Libro Oculto". This work was more aggressive, both in instrumental style and lyrical style, as a result of the criticism from heavy metal fans towards the band. 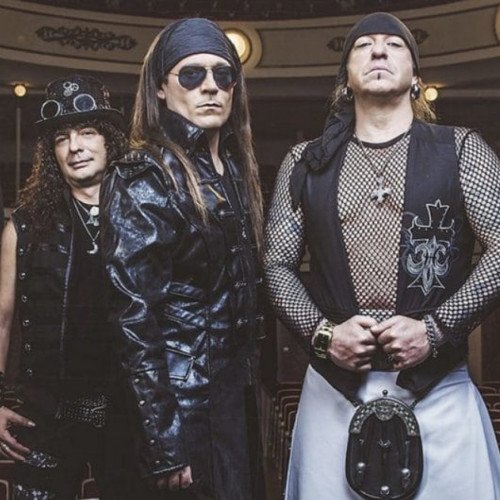 Mägo de Oz (Spanish for Wizard of Oz, with a metal umlaut) are a Spanish folk metal band from Begoña, Madrid[1] formed in mid-1988 by drummer Txus di Fellatio.[2] The band became well known for the strong Celtic feel to their music strengthened through their consistent usage of a violinist and flautist. The name for the band was chosen, according to founding member Txus, because "life is a yellow brick road, on which we walk in the company of others searching for our dreams."[3] On the 26th of October, 2018, the band played a special concert to celebrate their 30th anniversary, playing with a symphony orchestra at the WiZink Center in Madrid. [4] The band was founded in 1988 by the drummer Txus di Fellatio, who slowly recruited the rest of the members for the band, finalising the line-up by 1992. Originally, the band was called "Transilvania" ("Transylvania" in Spanish), named after an instrumental piece by Iron Maiden, a heavy influence on the band. In 1992, the band members were Txus (drums and backing vocals), Mohamed (violin), Charlie (lead guitar), Chema (rhythm guitar), Salva (bass), and Juanma (lead vocals, backup drums). They recorded several demos: Y qué más da (in 1989), Canción de cuna para un bohemio (1990), and Con la cabeza bien alta, in 1992. Their music had a wide range of styles and influences, but was primarily based around folk metal and Celtic music. In 1992, the band was a finalist in the "Concurso Villa de Madrid",[5] and in 1994, the band released their debut album, produced by Txus and Alberto Plaza under the name Mago de Oz. This album found very little success and people were barely aware of the band's existence. During this time, Mago de Oz went through a period of turbulence and substantial line-up changes, before the line-up that has persisted almost until the present time was formed in 1996. At this point, the lineup consisted of Txus (drums and backing vocals), Mohamed (violin and backing vocals), Carlitos (lead Guitar and backing vocals), Frank (rhythm Guitar, acoustic guitar, and backing vocals), Salva (bass and backing vocals), and José Andrëa (lead Vocals, keyboards).