The greatest rock band in Mexico "Café Tacvba" vs "Caifanes" 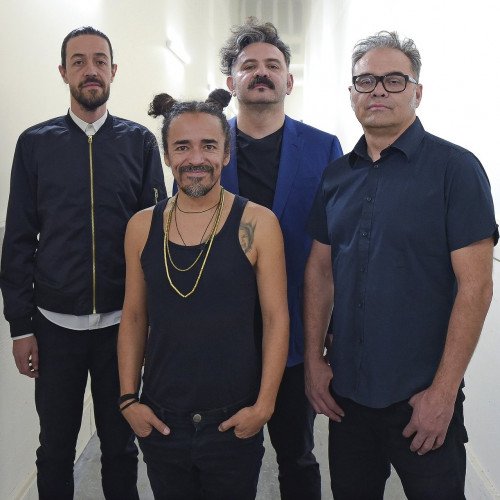 Café Tacuba (stylized Café Tacvba) is a band from Ciudad Satélite, Mexico. The group gained popularity in the early 1990s.[1] They were founded in 1989, before they had the current lineup of Rubén Isaac Albarrán Ortega (lead vocals, rhythm guitar), Emmanuel del Real Díaz (keyboards, piano, programming, rhythm guitar, melodica, vocals), José Alfredo "Joselo" Rangel Arroyo (lead guitar, vocals), and Enrique "Quique" Rangel Arroyo: (bass guitar, electric upright bass, vocals), their friend Roberto Silva played the keyboards for a short period of time. Mexican folk music player Alejandro Flores was for a time considered the 5th tacubo, as he played the violin in almost every Café Tacvba concert for many years. Since the Cuatro Caminos World Tour, Luis "El Children" Ledezma has played the drums in every concert but is not considered an official member of the band. Previously known as "Alicia ya no vive aquí" (a tribute to Martin Scorsese's Alice Doesn't Live Here Anymore), the band took its final name from a coffee shop (el Café de Tacuba) located in downtown Mexico City. The cafe, which opened in 1912 and had its heyday in the 1940s and 1950s, was representative of the Pachuco scene at the time, something the band would later acknowledge as an influence. The Café de Tacuba is still in operation as a coffee shop and restaurant on Tacuba Street, in Mexico City's Historic Center. The band changed its name to Café Tacvba (changing the u for a v) in order to avoid legal issues with the coffee shop. Singer Rubén Albarran and guitarist José Alfredo Rangel met while studying graphic design at Metropolitan Autonomous University in Mexico City.[2][3] Rangel's brother, Enrique, completed the band's lineup in 1989.[2] The group began playing music in the garage of a house in their neighborhood, Satélite, an upper-middle-class suburban area in the Naucalpan municipality, in the northern region of the Mexico City metropolitan area. Café Tacvba was principally influenced by alternative rock bands of the 1980s such as The Cure, The Clash, The Smiths, and Violent Femmes. Despite their English-language influences, the band members wanted to represent their native culture, so they incorporated Mexican influences into their music. The group began singing primarily in Spanish and changed their name to Café Tacvba.[1] Café Tacvba went from being a garage band to a concert act in 1989, when they joined the scene surrounding El Hijo del Cuervo, a cultural club in Coyoacán featuring writers and musicians. As they performed in various venues around Mexico City, they were discovered by Argentinian music producer Gustavo Santaolalla, who at the time was producing albums for leading bands of the burgeoning Rock en Español movement of the time.[1] Santaolalla arranged a contract for the band with Warner Music Latina (WEA), with plans to produce its debut album himself. Café Tacvba in turn proceeded to record their first song for commercial release, "Tamales de Iguanita," which WEA released as part of a Christmas-themed rock en español compilation, Diciembre 25, in 1990. 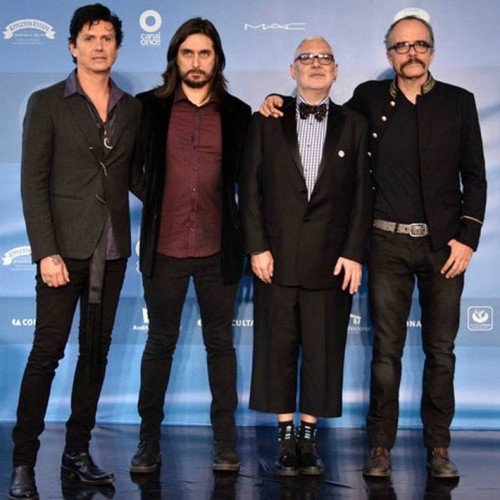 Caifanes is a rock en español band from Mexico City. Formed in 1987, the group achieved international fame during the late 1980s and early 1990s. The original lineup consisted of Saúl Hernández (vocals & guitar), Alejandro Marcovich [es] (lead guitar) Sabo Romo (bass guitar), Alfonso André [es] (drums), and Diego Herrera (keyboards and saxophone). Caifanes’ style can be described as a hybrid of British new wave, progressive rock and Latin percussion underscored by deep, somber, and Latin American-Mexican-Spanish-influenced lyrics and the vocal style of Saúl Hernández. Members of Caifanes have cited The Cure and King Crimson as major influences, with Adrian Belew having produced their third studio album, El Silencio, as well as making a guest appearance on it. The name Caifanes is derived from 1940s Mexican pachuco (zoot suiter) slang "Cae fine". Its equivalent in English would be “cool dude.” The word has also been used to describe the proverbial Mexican pachuco, delinquent, or outsider. The seeds of what was to later become Caifanes were planted in 1984 with Las Insolitas Imágenes de Aurora (The Unusual Images of Aurora), a band that included Saúl Hernández, Alfonso André and Alejandro Marcovich. According to Marcovich, Insólitas started out as a side project for the purpose of performing as a party band for the filming of his brother's film project (Marcovich's brother went on to direct various videos for Caifanes). At the time, both Hernández and Marcovich were playing in different bands. The members enjoyed the experience of playing in Insolitas and decided to continue. As the seriousness of the project grew the band began to play in different spots in Mexico City like Rockotitlán, High Tower, and El Jabalí. In May 1986, Insolitas recorded a live demo performed at Rockotitlán. Insólitas developed a strong cult following in Mexico City.