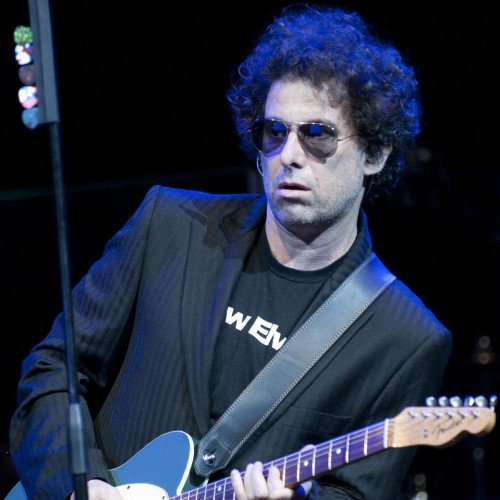 Andrés Calamaro (Andrés Calamaro Massel, August 22, 1961), is an Argentine musician, composer and Latin Grammy winner.[1] His former band Los Rodríguez was a major success in Spain and throughout Latin America mainly during the 1990s. He is multi-instrumentalist and became one of the main icons of Argentine rock, selling over 1.3 million records to date. Andres Calamaro was born in Buenos Aires. At 17 years of age he participated as a guest in the recording of an album of the group Raíces, and shortly after he started his own band, the Elmer Band, with guitarist friend Gringui Herrera. This band had an underground hit, Tristeza de la Ciudad (City Blues).[2] When Miguel Abuelo, leader of Los Abuelos de la Nada, returned to Argentina, he reunited the band and invited Calamaro to play keyboards. The band was a big success; Calamaro wrote some of their greatest hits, such as Sin gamulán, Mil horas and Costumbres argentinas. Before the dissolution of Los Abuelos de la Nada, Calamaro released his first solo album, Hotel Calamaro in 1984. A second album, Vida Cruel, recorded shortly after his separation from the band, was received warmly by the press but did not achieve commercial success. After a third album, Por Mirarte (1988), Calamaro started producing for bands such as Los Fabulosos Cadillacs, Los Enanitos Verdes and soloists such as Fabiana Cantilo. Calamaro closed the 1980s with his own band, featuring old friends Gringui Herrera and Ariel Rot, who recently came back from Spain. The trio recorded the album Nadie sale vivo de aquí (No One Gets Out of Here Alive) in 1989 with a number of guest musicians, which obtained the nomination of Best Record of the Year. 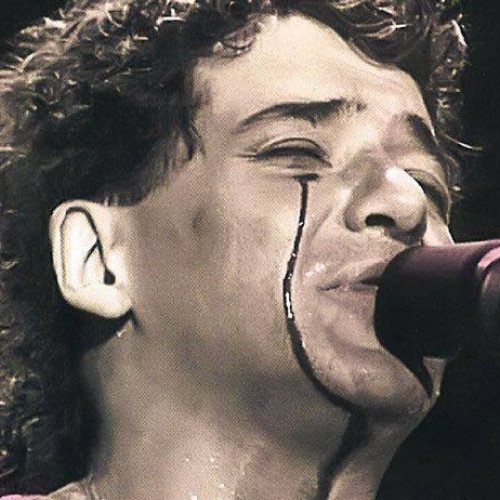 Miguel Angel Peralta, (March 21, 1946 – March 26, 1988) known by his artistic name Miguel Abuelo, was an Argentine rock musician and singer. A native of Munro, in the Greater Buenos Aires industrial belt, Miguel Peralta was one of the young rockers that grew out of the Norte hotel, the Perla del Once café and the La Cueva night club in Buenos Aires in the late 1960s. Abuelo did not play in La Cueva but was friendly with many who did. At some point, he and fellow poetry buff Pipo Lernoud were approached by Ben Molar, a recording executive of Mandioca (the only label in Argentina dedicated to record Spanish language rock). On the spur of the moment, Peralta claimed that he had a band called Los Abuelos de la Nada (the Grandparents of Nothingness) which was ready to enter the studio. The name was taken from a passage in a book by Leopoldo Marechal. As Molar did not call his bluff, Peralta actually assembled a band, featuring Claudio Gabis on guitar, Alberto Lara on bass, Héctor "Pomo" Lorenzo on drums, and Eduardo "Mayoneso" on keyboards. Their first single, Diana Divaga (Diana wanders), featured psychedelic influences. About this time, Miguel started using Abuelo as his artistic surname. Gabis was reluctant to commit to the band, so Abuelo drafted promising young guitarist Norberto Napolitano, better known as Pappo. After some time, the band's materials started drifting towards blues, and Abuelo agreed to quit and let Pappo take over. Eventually, the band mutated into Pappo's Blues, while Gabis found his place in Manal, another blues band. After a brief period of drifting and fighting amphetamine-induced depression, in 1970 Miguel joined Pomo, Carlos Cutaia on keyboards, and Luis Alberto Spinetta on guitar, in a band called El Huevo (The Egg). After a few rehearsals, Abuelo left. Later, with David Lebon in his place, the band would achieve fame as Pescado Rabioso. Wishing to escape what he perceived as an oppressive environment, Abuelo followed Lernoud's advice and took off to Barcelona in 1971.