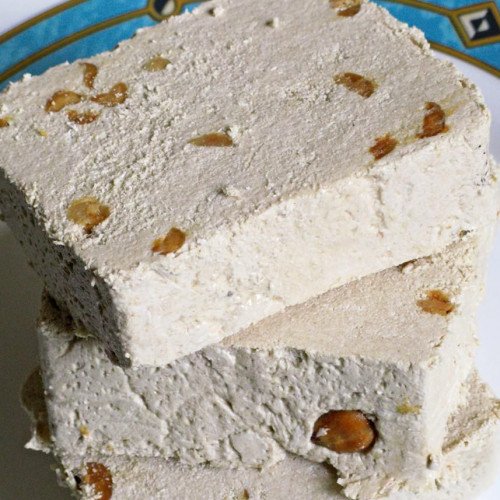 Halva (also halvah, halwa, and other spellings) refers to various local confection recipes in West Asia and its vicinity. The name is used for referring to a huge variety of confections, with the most geographically common variety based on fried semolina.Halva is also popular in Central and South Asia, the Balkans, the Caucasus, Eastern Europe, Malta, North Africa and the Horn of Africa. Identical sweets exist in other countries, such as China, though these are not generally referred to as "halva". Halva can be kept at room temperature during non-summer months with little risk of spoilage. 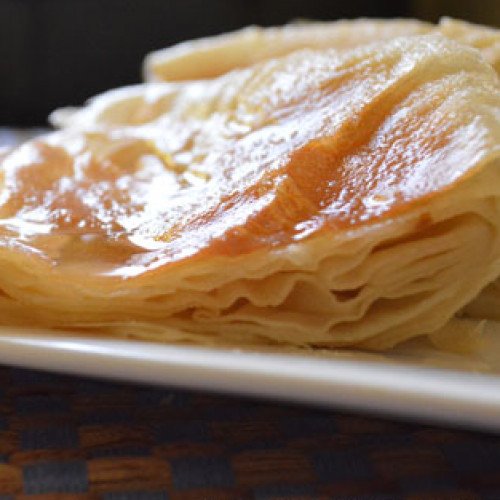 Feteer meshaltet (Egyptian Arabic: فطير مشلتت‎, literally "cushioned pies" or "cushion-like pies"), often simply referred to as feteer (فطير), is a flaky Egyptian layered pastry. It consists of many thin layers of dough and ghee and an optional filling. The fillings can be both sweet or savory. Sweet fillings may include cheese, coconut, mehalabiya, malban, nutella or chocolate, while savory fillings can be anything from ground beef to sausage or cheese. Plain feteer is usually soaked in honey and spread with jam or cheese or served with olives. Because of its versatility, feteer is often referred to as an Egyptian pizza.Feteer meshaltet has become an important symbol of hospitality in Egypt. As such, it was served to American president Barack Obama during his visit to Egypt in June 2009. Egyptian families traditionally give it as gifts to visitors and friends. It is also commonly prepared for holidays, weddings, and other celebrations.