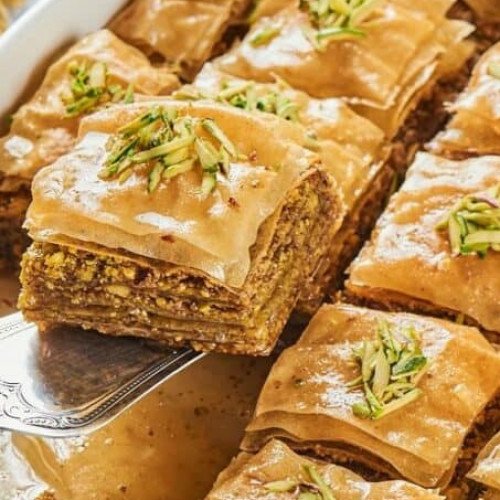 Baklava (, or ; Ottoman Turkish: باقلوا‎) is a layered pastry dessert made of filo pastry, filled with chopped nuts, and sweetened with syrup or honey. It was one of the most popular sweet pastries of Ottoman cuisine.The pre-Ottoman origin of the dish is unknown, but, in modern times, it is a common dessert of Iranian, Turkish and Arab cuisines, and other countries of the Levant and Maghreb, along with the South Caucasus, Balkans, and Central Asia. 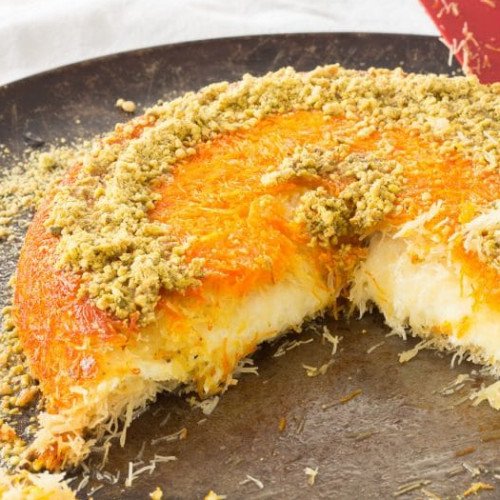 Kanafeh (Arabic: كُنافة‎, [kʊˈnaːfa] (listen), Turkish: Künefe, Levantine: [ˈkneːfe]) (also numerous alternative spellings) is a traditional Middle Eastern dessert made with shredded filo pastry, or alternatively fine semolina dough, soaked in sweet, sugar-based syrup, and typically layered with cheese, or with other ingredients such as clotted cream or nuts, depending on the region. It is popular in the Arab world, particularly the Levant and Egypt, and especially among Palestinians. In addition, variants are found in Turkey, Greece, and the Balkans, as well as in the South Caucasus such as Armenia and Azerbaijan. In Arabic, kunāfa may refer to the string pastry itself, or to the entire dessert dish. In Turkish, the string pastry is known as tel kadayıf, and the cheese-based dessert that uses it as künefe. In the Balkans, the shredded dough is similarly known as kadaif, and in Greece as kataifi, and is the basis of various dishes rolled or layered with it, including dessert pastries with nuts and sweet syrups. One of the most well-known preparations of kanafeh is knafeh nabulsiyeh, which originated in the Palestinian city of Nablus, and is the most representative and iconic Palestinian dessert. Knafeh nabilsiyeh uses a white-brine cheese called Nabulsi. It is prepared in a large round shallow dish, the pastry is colored with orange food coloring, and sometimes topped with crushed pistachio nuts.