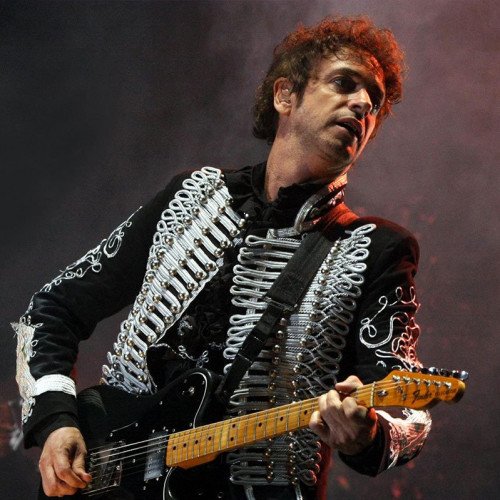 Gustavo Adrián Cerati (11 August 1959 – 4 September 2014) was an Argentine singer-songwriter, composer and producer, considered one of the most important and influential figures of Ibero-American rock.[1][2][3][4] Cerati along with his band Soda Stereo, were one of the most popular and influential rock and pop groups of the 1980s and '90s.[5] Cerati was the recipient of many awards throughout his career including various Grammys, MTV awards, as well as the MTV (Latin America) Legend Award with Soda Stereo, the first of its kind.[6][7] On 15 May 2010, Cerati suffered a massive stroke in Caracas following a concert; the stroke left him in a coma, and four years later, on 4 September 2014, Cerati died of cardiac arrest in Buenos Aires aged 55.[8] He and his band had intended to go to a show-after-party at the rock club Moulin Rouge, located on Francisco Solano López Avenue in the Sabana Grande area of Caracas but his symptoms started developing backstage, right after his last performance concluded.[9] After performing two shows in Medellín and Bogotá, Colombia, Cerati headed to Venezuela and performed one last show in Caracas on 15 May 2010. Cerati suffered a stroke[34] just after putting an end to this performance. He developed the first symptoms of an unknown condition backstage. He was hospitalized in Centro Médico La Trinidad in Caracas under medical surveillance. Three days later, Cerati underwent surgery to relieve pressure on his brain due to the stroke he suffered. On 7 June 2010, Cerati was transferred to the FLENI Neurological Institute in Buenos Aires.[35] Doctors immediately treated Cerati for a respiratory tract infection.[36] The following day, doctors reported extensive brain damage due to the stroke. Cerati fell into a coma sometime before. He was maintained on life support hoping for a recovery. A month after the stroke, Claudio E. Pensa M.D., medical director of the FLENI Neurological Institute, issued a statement to the press stating that Cerati's medical condition remained unchanged and that he would only provide new information if changes were to occur. On December 2, 2010, a statement was issued by ALCLA Clinic's medical director stating that, neurologically, Cerati was reacting to thermal stimuli.[13] On 14 May 2014, the family released a statement to commemorate the fourth anniversary of the stroke. It included a medical report by Gustavo Barbalace M.D. stating: "Mr. Gustavo Cerati remains hospitalized (...) without any serious complications, in good nutritional shape and without lesions due to immobility. Neurologically there's no significant changes and remains under mechanical respiratory aid."[37] After four years in a coma, Gustavo Cerati died from cardiac arrest on the morning of 4 September 2014 while on life support.[38] Immediately after his death, Cerati's doctor stated to the media "Gustavo died with dignity without any pain, without any wounds."[39] His body was buried at La Chacarita Cemetery in Buenos Aires. 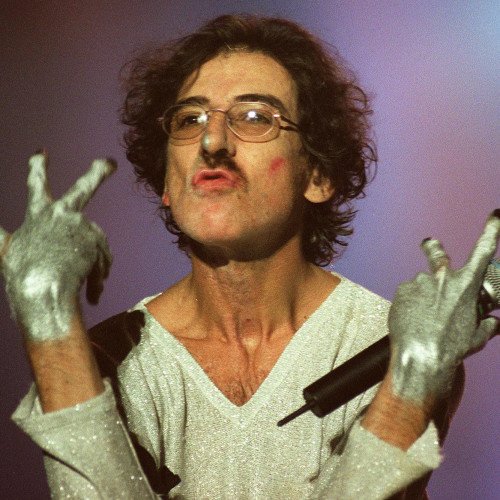 Charly García (born Carlos Alberto García, 23 October 1951) is an Argentine singer-songwriter, musician and record producer. With a vast and renowned career, he formed and headlined two of the most popular bands in Argentina's rock history: Sui Generis in the 1970s and Serú Girán in the 1980s,[1][2][3] plus cult status groups like progressive-rock act La Máquina de Hacer Pájaros and folk rock supergroup PorSuiGieco, both also in the 1970s. Since the 1980s García has worked mostly as a solo musician.[4] His main instrument is the piano, followed by guitar and keyboards. García is widely considered by critics as one of the most influential rock artists in South America, and (together with Luis Alberto Spinetta) as "The Father of Argentine Rock".[5] García is also well known for his bicolor moustache, with one side white, due to vitiligo. García first heard The Beatles when he was thirteen. Having previously only been exposed to classical music and folk, he would describe the Beatles as "classical music from Mars". In high school he met Carlos Alberto "Nito" Mestre and the two fused their bands to give birth to Sui Generis. The band at first experimented with psychedelic rock, but its style would quickly be established as folk-rock with a certain influence from the symphonic rock of the day. At their first big gig, the band's bassist, guitarist and drummer all failed to appear. Only Charlie (García spelled his name with "ie" back then) and Nito showed up, playing piano and flute respectively. They were forced to play on their own, and were a hit with the audience despite the other musicians' absence. The band's strength lay in the songs' musical simplicity and romantic lyrics, which appealed widely to teenagers. In 1972, Sui Generis released its first LP, Vida, which quickly became popular among Argentine teenagers. Confesiones de invierno ("Winter Confessions"), their second LP, was released in 1973. This album showcased higher production values and better studio equipment, and was very successful commercially. 1974 was a year of changes. Charlie lost interest in "the piano and flute" sound that Sui Generis had been developing, and decided that Sui Generis needed a change; the band would evolve towards a more traditional rock sound, incorporating bass and drums. To that end, Rinaldo Rafanelli and Juan Rodríguez joined the band. In many live shows, Sui Generis also brought in a gifted guitar player, David Lebón, whom Charly admired very much.