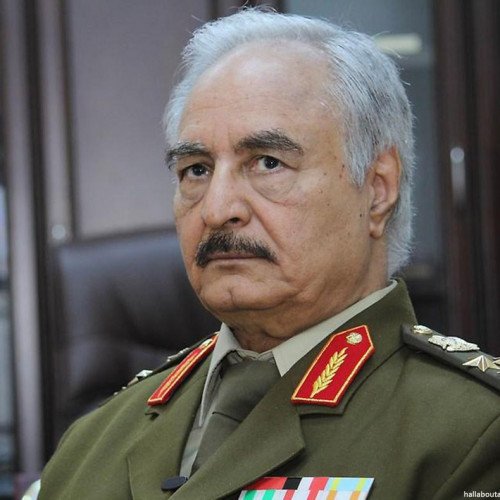 Field Marshal Khalifa Belqasim Haftar (Arabic: خليفة بلقاسم حفتر‎, romanized: Ḵalīfa Bilqāsim Ḥaftar; born 1943) is a Libyan-American general and the commander of the Tobruk-based Libyan National Army (LNA). On 2 March 2015, he was appointed commander of the armed forces loyal to the elected legislative body, the Libyan House of Representatives.Haftar was born in the Libyan city of Ajdabiya. He served in the Libyan army under Muammar Gaddafi, and took part in the coup that brought Gaddafi to power in 1969. He took part in the Libyan contingent against Israel in the Yom Kippur War of 1973. In 1987, he became a prisoner of war during the war against Chad after being lured into a trap and captured, which was then a major embarrassment for Gaddafi and represented a major blow to Gaddafi's ambitions in Chad. While being held prisoner, he and his fellow officers formed a group hoping to overthrow Gaddafi. He was released around 1990 in a deal with the United States government and spent nearly two decades living in the US in Langley, Virginia, and gained U.S. citizenship. In 1993, while living in the United States, he was convicted in absentia of crimes against the Great Socialist People's Libyan Arab Jamahiriya and sentenced to death. Haftar held a senior position in the forces which overthrew Gaddafi in the 2011 Libyan Civil War. In 2014, he was commander of the Libyan Army when the General National Congress (GNC) refused to give up power in accordance with its term of office. Haftar launched a campaign against the GNC and its Islamic fundamentalist allies. His campaign allowed elections to take place to replace the GNC but then developed into a civil war. In 2017, Ramzi al-Shaeri, Vice-President of the Derna city council and lawyers Ryan Goodman and Alex Whiting accused Haftar of the war crime of ordering the killing of prisoners of war during the recapture of Derna.Haftar has been described as "Libya's most potent warlord", having fought "with and against nearly every significant faction" in Libya's conflicts, as having a "reputation for unrivalled military experience" and as governing "with an iron fist". Although Haftar is reportedly an anti-Islamist, his allies include the Salafi Madkhali militias. 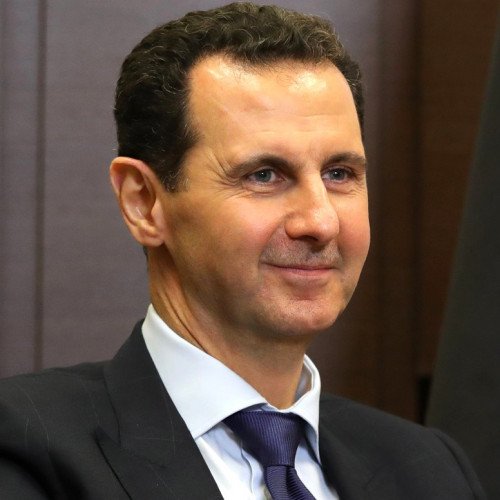 Bashar Hafez al-Assad (born 11 September 1965) is a Syrian politician who has been the 19th president of Syria since 17 July 2000. In addition, he is the commander-in-chief of the Syrian Armed Forces and regional secretary of the Arab Socialist Ba'ath Party's branch in Syria. His father, Hafez al-Assad, was the president of Syria before him, serving from 1971 to 2000. Born and raised in Damascus, Bashar al-Assad graduated from the medical school of Damascus University in 1988 and began to work as a doctor in the Syrian Army. Four years later, he attended postgraduate studies at the Western Eye Hospital in London, specialising in ophthalmology. In 1994, after his elder brother Bassel died in a car crash, Bashar was recalled to Syria to take over Bassel's role as heir apparent. He entered the military academy, taking charge of the Syrian military presence in Lebanon in 1998. Political scientists have characterised the Assad family's rule of Syria as a personalist dictatorship. On 17 July 2000, Assad became president, succeeding his father, who died in office a month prior. In the uncontested and non-democratic 2000 and 2007 elections, he received 97.29% and 97.6% support, respectively. On 16 July 2014, Assad was sworn in for another seven-year term after another non-democratic election gave him 88.7% of the vote. The election was held only in areas controlled by the Syrian government during the country's ongoing civil war and was criticised by the UN, the Syrian opposition and Western countries, while Syria's allies, including Iran, Russia and Venezuela, stated that the election was "free and fair". Throughout his leadership, human rights groups have characterized Syria's human rights situation as poor. The Assad government describes itself as secular, while some political scientists have claimed that the government exploits sectarian tensions in the country and relies upon the Alawite minority to remain in power.Once seen by many states as a potential reformer, the United States, the European Union and the majority of the Arab League called for Assad's resignation from the presidency in 2011 after he ordered a violent crackdown on Arab Spring protesters, which led to the Syrian Civil War. In December 2013, the UN High Commissioner for Human Rights Navi Pillay stated that findings from an inquiry by the United Nations implicated Assad in war crimes. The OPCW-UN Joint Investigative Mechanism concluded in October 2017 that Assad's government was responsible for the Khan Shaykhun chemical attack. In June 2014, the American Syrian Accountability Project included Assad on a list of war crimes indictments of government officials and rebels it sent to the International Criminal Court. Assad has rejected allegations of war crimes and criticised the American-led intervention in Syria for attempting regime change.