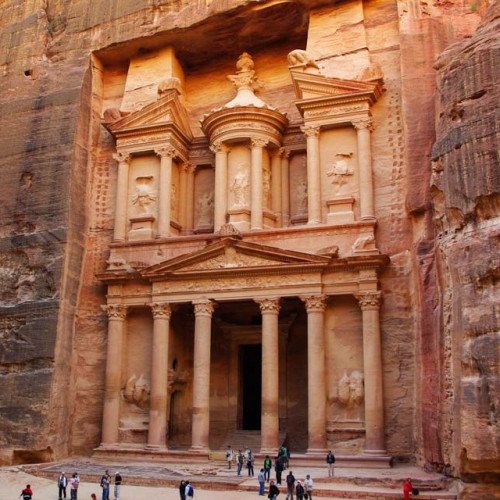 Jordan (Arabic: الأردن‎; tr. Al-ʾUrdunn [al.ʔur.dunː]), officially the Hashemite Kingdom of Jordan (Arabic: المملكة الأردنية الهاشمية‎; tr. Al-Mamlakah al-’Urdunniyyah Al-Hāshimiyyah), is an Arab country in the Levant region of Western Asia, on the East Bank of the Jordan River. Jordan is bordered by Saudi Arabia, Iraq, Syria, Israel and Palestine (West Bank). The Dead Sea is located along its western borders and the country has a 26-kilometre (16 mi) coastline on the Red Sea in its extreme south-west. Jordan is strategically located at the crossroads of Asia, Africa and Europe. The capital, Amman, is Jordan's most populous city as well as the country's economic, political and cultural centre.What is now Jordan has been inhabited by humans since the Paleolithic period. Three stable kingdoms emerged there at the end of the Bronze Age: Ammon, Moab and Edom. Later rulers include the Nabataean Kingdom, the Roman Empire, and the Ottoman Empire. After the Great Arab Revolt against the Ottomans in 1916 during World War I, the Ottoman Empire was partitioned by Britain and France. The Emirate of Transjordan was established in 1921 by the Hashemite, then Emir, Abdullah I, and the emirate became a British protectorate. In 1946, Jordan became an independent state officially known as the Hashemite Kingdom of Transjordan, but was renamed in 1949 to the Hashemite Kingdom of Jordan after the country captured the West Bank during the 1948 Arab–Israeli War and annexed it until it was lost to Israel in 1967. Jordan renounced its claim to the territory in 1988, and became the second Arab state to sign a peace treaty with Israel in 1994. Jordan is a founding member of the Arab League and the Organisation of Islamic Co-operation. The sovereign state is a constitutional monarchy, but the king holds wide executive and legislative powers. Jordan is a semi-arid country with an area of 89,342 km2 (34,495 sq mi) and a population numbering 10 million, making it the 11th-most populous Arab country. Sunni Islam, practised by around 95% of the population, is the dominant religion and coexists with an indigenous Christian minority. Jordan has been repeatedly referred to as an "oasis of stability" in a turbulent region. It has been mostly unscathed by the violence that swept the region following the Arab Spring in 2010. From as early as 1948, Jordan has accepted refugees from multiple neighbouring countries in conflict. An estimated 2.1 million Palestinian and 1.4 million Syrian refugees are present in Jordan as of a 2015 census. The kingdom is also a refuge to thousands of Iraqi Christians fleeing persecution by ISIL. While Jordan continues to accept refugees, the recent large influx from Syria placed substantial strain on national resources and infrastructure.Jordan is classified as a country of "high human development" with an "upper middle income" economy. The Jordanian economy, one of the smallest economies in the region, is attractive to foreign investors based upon a skilled workforce. The country is a major tourist destination, also attracting medical tourism due to its well developed health sector. Nonetheless, a lack of natural resources, large flow of refugees and regional turmoil have hampered economic growth. 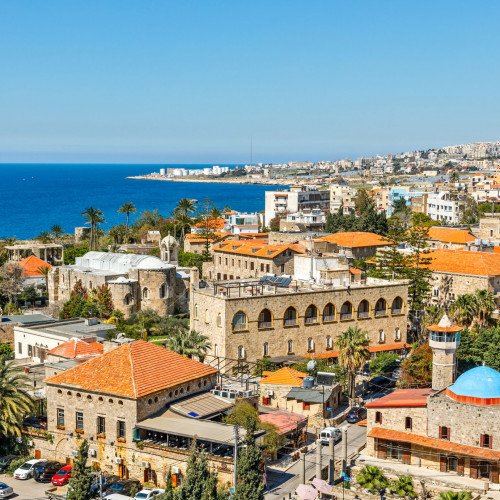 Lebanon ( (listen)), officially known as the Lebanese Republic, is a country in the Levant region of Western Asia, and the transcontinental region of the Middle East. It is bordered by Syria to the north and east and Israel to the south, while Cyprus lies west across the Mediterranean Sea. Lebanon's location at the crossroads of the Mediterranean Basin and the Arabian hinterland has contributed to its rich history and shaped a cultural identity of religious and ethnic diversity. At just 10,452 km2 (4,036 mi2), it is the smallest recognized sovereign state on the mainland Asian continent. The official language, Arabic, is the most common language spoken by the citizens of Lebanon.The earliest evidence of civilization in Lebanon dates back more than seven thousand years, predating recorded history. Lebanon was home to the Phoenicians, a maritime culture that flourished for almost three thousand years (c. 3200–539 BC). In 64 BC, the Roman Empire conquered the region, and eventually became one of its leading centers of Christianity. The Mount Lebanon range saw the emergence of a monastic tradition known as the Maronite Church. As the Arab Muslims conquered the region, the Maronites held onto their religion and identity. However, a new religious group, the Druze, established themselves in Mount Lebanon as well, generating a religious divide that has lasted for centuries. During the Crusades, the Maronites re-established contact with the Roman Catholic Church and asserted their communion with Rome. These ties have influenced the region into the modern era. Lebanon was conquered by the Ottomans in the 16th century and remained under their rule for the next 400 years. Following the empire's collapse after World War I, the five provinces constituting modern Lebanon came under the French Mandate. The French expanded the borders of the Mount Lebanon Governorate, which was predominately Maronite and Druze, to include more Muslims. Upon independence in 1943, Lebanon established a unique confessionalist form of government, with the major religious sects apportioned specific political powers. Lebanon initially enjoyed political and economic stability, which was shattered by the bloody Lebanese Civil War (1975–1990) between various political and sectarian factions. The war partially led to military occupations by Syria (1975 to 2005) and Israel (1985 to 2000). Despite Lebanon's small size, Lebanese culture is renowned both in the Arab world and globally, powered by its large and influential diaspora. Prior to the civil war, the country enjoyed a diversified economy that included tourism, agriculture, commerce, and banking. Its financial power and stability through the 1950s and 1960s earned Lebanon the name of "Switzerland of the East", while its capital, Beirut, attracted so many tourists that it was known as "the Paris of the Middle East". Since the end of the war, there have been extensive efforts to revive the economy and rebuild national infrastructure. While still recovering from the political and economic effects of the conflict, Lebanon remains a cosmopolitan and developing country, with the highest Human Development Index and GDP per capita in the Arab world outside of the oil-rich economies of the Persian Gulf.Lebanon was a founding member of the United Nations in 1945 and is a member of the Arab League (1945), the Non-Aligned Movement (1961), Organisation of the Islamic Cooperation (1969), and the Organisation internationale de la francophonie (1973).