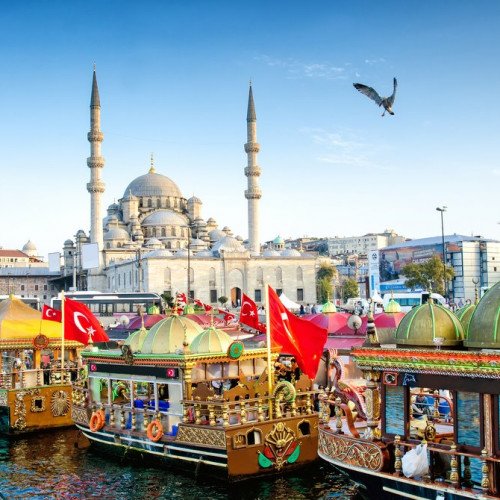 Turkey (Turkish: Türkiye [ˈtyɾcije]), officially the Republic of Turkey (Turkish: Türkiye Cumhuriyeti [ˈtyɾcije dʒumˈhuːɾijeti] (listen)), is a transcontinental country straddling Southeastern Europe and Western Asia. It is bordered on its northwest by Greece and Bulgaria; north by the Black Sea; northeast by Georgia; east by Armenia, Azerbaijan, and Iran; southeast by Iraq; south by Syria and the Mediterranean Sea; and west by the Aegean Sea. Istanbul, which straddles Europe and Asia, is the country's largest city, while Ankara is the capital. Approximately 70 to 80 percent of the country's citizens are ethnic Turks, while the largest minority are Kurds at 20 percent.One of the world's earliest permanently settled regions, present-day Turkey was home to important Neolithic sites, and was inhabited by various civilisations. Hellenization started in the area during the era of Alexander the Great and continued into the Byzantine era. The Seljuk Turks began migrating in the 11th century, and the Sultanate of Rum ruled Anatolia until the Mongol invasion in 1243, when it disintegrated into small Turkish principalities. Beginning in the late 13th century, the Ottomans started uniting the principalities and conquering the Balkans, and the Turkification of Anatolia increased during the Ottoman period. After Mehmed II conquered Constantinople in 1453, Ottoman expansion continued under Selim I. During the reign of Suleiman the Magnificent, the Ottoman Empire became a global power. From the late 18th century onwards, the empire's power declined with a gradual loss of territories and wars. In an effort to consolidate the weakening empire, Mahmud II started a period of modernisation in the early 19th century. The 1913 coup d'état effectively put the country under the control of the Three Pashas, who were largely responsible for the Empire's entry into World War I in 1914. During World War I, the Ottoman government committed genocides against its Armenian, Assyrian and Pontic Greek subjects. After the Ottomans and the other Central Powers lost the war, the Ottoman Empire was partitioned. The Turkish War of Independence against the occupying Allied Powers resulted in the abolition of the sultanate in 1922, and the establishment of the Republic of Turkey; which became a secular, unitary, formerly parliamentary republic that adopted a presidential system. Turkey is a regional power and a newly industrialized country—ranking very high in the Human Development Index; with a geopolitically strategic location. It is a charter member of the United Nations, an early member of NATO, the IMF, and the World Bank, and a founding member of the OECD, OSCE, BSEC, OIC, and G20. After becoming one of the early members of the Council of Europe in 1950, Turkey became an associate member of the EEC in 1963, joined the EU Customs Union in 1995, and started accession negotiations with the European Union in 2005. In a non-binding vote on 13 March 2019, the European Parliament called on the EU governments to suspend Turkey's accession talks; which, despite being stalled since 2018, remain active as of 2021.

Beautiful country and beautiful civilization 50 %
50 % Nothing to say 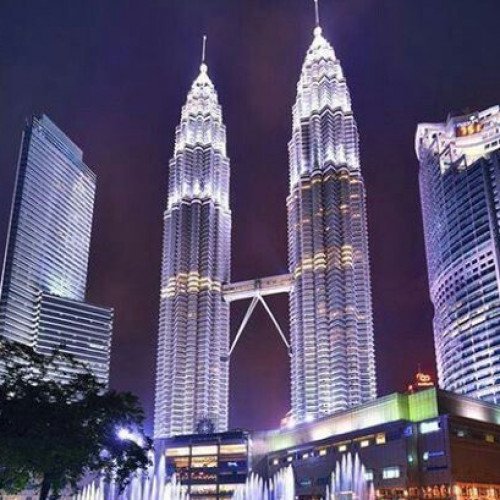 Malaysia ( (listen) mə-LAY-zee-ə, -⁠zhə; Malay: [məlejsiə]) is a country in Southeast Asia. The federal constitutional monarchy consists of thirteen states and three federal territories, separated by the South China Sea into two regions, Peninsular Malaysia and Borneo's East Malaysia. Peninsular Malaysia shares a land and maritime border with Thailand and maritime borders with Singapore, Vietnam, and Indonesia. East Malaysia shares land and maritime borders with Brunei and Indonesia and a maritime border with the Philippines and Vietnam. Kuala Lumpur is the national capital and largest city while Putrajaya is the seat of the federal government. With a population of over 32 million, Malaysia is the world's 43rd-most populous country. The southernmost point of continental Eurasia is in Tanjung Piai. In the tropics, Malaysia is one of 17 megadiverse countries, home to a number of endemic species. Malaysia has its origins in the Malay kingdoms which, from the 18th century, became subject to the British Empire, along with the British Straits Settlements protectorate. Peninsular Malaysia was unified as the Malayan Union in 1946. Malaya was restructured as the Federation of Malaya in 1948 and achieved independence on 31 August 1957. Malaya united with North Borneo, Sarawak, and Singapore on 16 September 1963 to become Malaysia. In 1965, Singapore was expelled from the federation.The country is multi-ethnic and multi-cultural, which has a significant effect on its politics. About half the population is ethnically Malay, with minorities of Chinese, Indians, and indigenous peoples. The country's official language is Malaysian, a standard form of the Malay language. English remains an active second language. While recognising Islam as the country's established religion, the constitution grants freedom of religion to non-Muslims. The government is modelled on the Westminster parliamentary system and the legal system is based on common law. The head of state is an elected monarch, chosen from among the nine state sultans every five years. The head of government is the Prime Minister. After independence, the Malaysian GDP grew at an average of 6.5% per annum for almost 50 years. The economy has traditionally been fuelled by its natural resources but is expanding in the sectors of science, tourism, commerce and medical tourism. Malaysia has a newly industrialised market economy, ranked third-largest in Southeast Asia and 33rd-largest in the world. It is a founding member of ASEAN, EAS, OIC and a member of APEC, the Commonwealth and the Non-Aligned Movement.