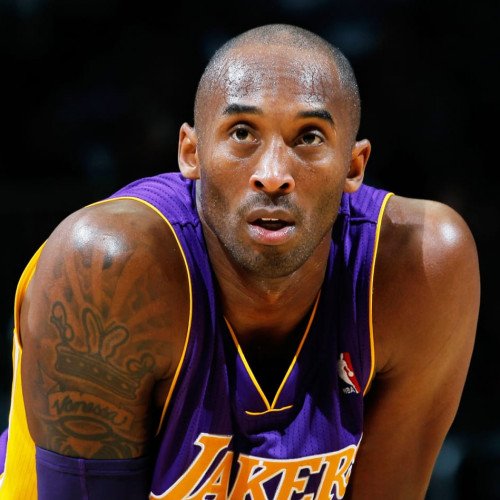 Kobe Bean Bryant ( KOH-bee; August 23, 1978 – January 26, 2020) was an American professional basketball player. A shooting guard, he spent his entire 20-year career with the Los Angeles Lakers in the National Basketball Association (NBA). Regarded as one of the greatest players of all time, Bryant helped the Lakers win five NBA championships, and was an 18-time All-Star, a 15-time member of the All-NBA Team, a 12-time member of the All-Defensive Team, the 2008 NBA Most Valuable Player (MVP), and a two-time NBA Finals MVP. Bryant also led the NBA in scoring twice, and ranks fourth on the league's all-time regular season scoring and all-time postseason scoring lists. Born in Philadelphia and partly raised in Italy, Bryant was recognized as the top high-school basketball player in the U.S. while at Lower Merion High School in Pennsylvania. The son of former NBA player Joe Bryant, he declared for the 1996 NBA draft after graduation, and was selected by the Charlotte Hornets with the 13th overall pick; the Hornets then traded him to the Lakers. As a rookie, Bryant earned a reputation as a high-flyer and a fan favorite by winning the 1997 Slam Dunk Contest, and he was named an All-Star by his second season. Despite a feud with teammate Shaquille O'Neal, the pair led the Lakers to three consecutive NBA championships from 2000 to 2002. In 2003, Bryant was charged with sexual assault following an accusation by a young female hotel clerk. The criminal charges were dropped after the accuser refused to testify, and a lawsuit was settled out of court. Bryant issued a public apology and admitted to a sexual encounter but denied the assault allegation and said it was consensual. After the Lakers lost the 2004 NBA Finals, O'Neal was traded and Bryant became the cornerstone of the Lakers. He led the NBA in scoring during the 2005–06 and 2006–07 seasons. In 2006, he scored a career-high 81 points; the second most points scored in a single game in league history, behind Wilt Chamberlain's 100-point game in 1962. Bryant led the team to two consecutive championships in 2009 and 2010, and was named NBA Finals MVP on both occasions. He continued to be among the top players in the league through 2013, when he suffered a torn Achilles tendon at age 34. He subsequently suffered season-ending injuries to his knee and shoulder, respectively, in the following two seasons. Citing physical decline, Bryant retired after the 2015–16 season. Bryant is the all-time leading scorer in Lakers franchise history. He was also the first guard in NBA history to play at least 20 seasons. His 18 All-Star designations are the second most all time, while it is the record for most consecutive appearances as a starter. Bryant's four All-Star Game MVP Awards are tied with Bob Pettit for the most in NBA history. He gave himself the nickname "Black Mamba" in the mid-2000s, and the epithet became widely adopted by the general public. At the 2008 and 2012 Summer Olympics, he won two gold medals as a member of the U.S. national team. In 2018, he won the Academy Award for Best Animated Short Film for his 2017 film Dear Basketball.Bryant died at age 41, along with his 13-year-old daughter Gianna and seven others, in a helicopter crash in Calabasas, California in 2020. A number of tributes and memorials were subsequently issued, including renaming the All-Star Game MVP Award in his honor. 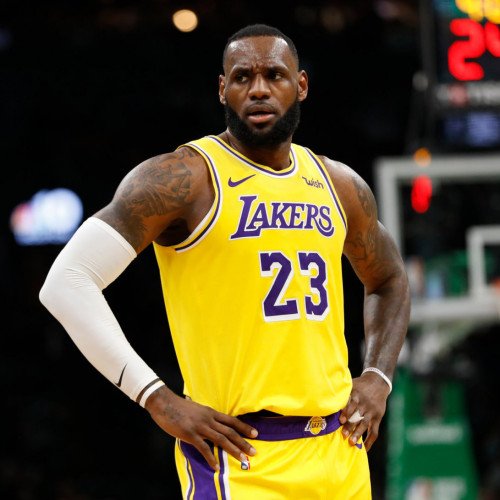 LeBron Raymone James Sr. (; born December 30, 1984) is an American professional basketball player for the Los Angeles Lakers of the National Basketball Association (NBA). Widely considered one of the greatest NBA players in history, James is frequently compared to Michael Jordan in debates over the greatest basketball player of all time. Playing for the Cleveland Cavaliers, Miami Heat, and Los Angeles Lakers, James is the only player in NBA history to have won NBA championships with three franchises as Finals MVP. He has competed in ten NBA Finals, including eight consecutive with the Heat and Cavaliers from 2011 through 2018. His accomplishments include four NBA championships, four NBA Most Valuable Player (MVP) Awards, four Finals MVP Awards, and two Olympic gold medals. During his 17-year career, James holds the record for all-time playoffs points, is third in all-time points, and eighth in career assists. James has been selected to the All-NBA First Team a record 13 times, made the All-Defensive First Team five times, and has been named an All-Star 17 times, including three All-Star MVP selections. James played basketball for St. Vincent–St. Mary High School in his hometown of Akron, Ohio, where he was heavily touted by the national media as a future NBA superstar. A prep-to-pro, he was selected by Cleveland with the first overall pick of the 2003 NBA draft. Named the 2003–04 NBA Rookie of the Year, he soon established himself as one of the league's premier players, winning the NBA MVP Award in 2009 and 2010. After failing to win a championship with Cleveland, James left in 2010 to sign as a free agent with Miami. This move was announced in an ESPN special titled The Decision, and is one of the most controversial free agent decisions in sports history. James won his first two NBA championships while playing for the Heat in 2012 and 2013; in both of these years, he also earned league MVP and Finals MVP. After his fourth season with the Heat in 2014, James opted out of his contract to re-sign with the Cavaliers. In 2016, he led the Cavaliers to victory over the Golden State Warriors in the NBA Finals by coming back from a 3–1 deficit, delivering the franchise's first championship and ending Cleveland's 52-year professional sports title drought. In 2018, James opted out of his contract with the Cavaliers to sign with the Lakers, where he won the 2020 championship and was awarded his fourth Finals MVP. Off the court, James has accumulated additional wealth and fame from numerous endorsement contracts. He has been featured in books, documentaries, television commercials (including winning a Sports Emmy Award for a documentary as an executive producer), and has hosted the ESPY Awards (including winning 19 ESPY Awards in his own right) and Saturday Night Live. In 2015, he appeared in the film Trainwreck. As a part-owner of Liverpool F.C. since 2011, James has a Premier League championship to his credit, with the club having won the 2020 title. Having become more involved in philanthropic and activist pursuits later in his career, James's charitable organization (LeBron James Family Foundation) helped open a school, housing complex, and community center/retail plaza in his hometown of Akron.