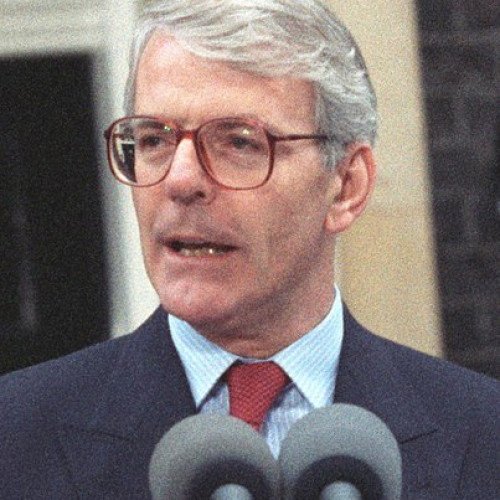 Sir John Major (born 29 March 1943) is a British politician who served as Prime Minister of the United Kingdom and Leader of the Conservative Party from 1990 to 1997. Major served in the Thatcher government from 1987 to 1990 and was Member of Parliament (MP) for Huntingdon, formerly Huntingdonshire, from 1979 to 2001. Since Margaret Thatcher's death in 2013, he has been both the oldest and earliest-serving of all the living former British prime ministers. Major was born in St Helier, London. His family moved from Worcester Park to Brixton due to their worsening financial situation. He left school in 1959 with just three O-levels. After working a variety of jobs and enduring a period of unemployment, he established a career at Standard Bank. However, his ambitions lay in politics. After a period as a councillor in Lambeth, he was elected for Huntingdonshire at the 1979 general election and served as a parliamentary private secretary, assistant whip and Minister for Social Security. In 1987, he joined the Cabinet as Chief Secretary to the Treasury and was promoted to Foreign Secretary in July 1989 and Chancellor of the Exchequer in October. As Chancellor, he presented the 1990 budget. Major became Prime Minister when he won the 1990 Conservative Party leadership election after Margaret Thatcher resigned during the early stages of the contest. In the early days of his premiership, he launched the Citizen's Charter, replaced the unpopular Community Charge ("poll tax") with the Council Tax, and negotiated the European Union's Maastricht Treaty in December 1991. In the midst of a severe recession, he went on to lead the Conservatives to a fourth consecutive electoral victory at the 1992 general election with over 14 million votes but a reduced majority in the House of Commons. Shortly after this, his government was forced to withdraw the pound sterling from the European Exchange Rate Mechanism (ERM) on 16 September 1992, a day which came to be known as Black Wednesday. This event led to a loss of confidence in Major's economic policies and he was never able to achieve a lead in opinion polls again even as the economy eventually revived. He continued to push on with reforming education, health and criminal justice, privatising British Rail and the coal industry. Major signed the Downing Street Declaration, reinvigorating the Northern Ireland peace process; which would lead to the Good Friday Agreement under his successor Tony Blair. By the mid-1990s, the Conservatives were highly polarised on European integration and also embroiled in a series of sexual and financial scandals involving various MPs and cabinet ministers (widely known as "sleaze"). Criticism of Major's leadership reached such a pitch that he chose to resign as party leader in June 1995, challenging his critics to either back him or challenge him; he was duly challenged by John Redwood but was easily re-elected. On the international stage, he deployed British troops to the Gulf War and Bosnia and Herzegovina. Over the 1990s, the Labour Party moved towards the centre and won several by-elections, eventually depriving Major's government of a parliamentary majority in December 1996. Major went on to lose the 1997 general election five months later, in one of the largest electoral defeats since the Great Reform Act of 1832, announcing his resignation as Conservative Party leader shortly thereafter. Major was succeeded by William Hague as party leader in June 1997. He went on to retire from active politics, leaving the House of Commons at the 2001 general election, and has since pursued his interests in business and charity work. By the end of his premiership, Major was reviled by many in his party and the press as being a weak and unassertive leader, however, his time in office has come to be reappraised in more recent years, with many pointing to his successes in the Northern Irish peace process, restoring economic growth, reforming the public sector, boosting the profile of arts and sports, and preserving British influence on the international stage. 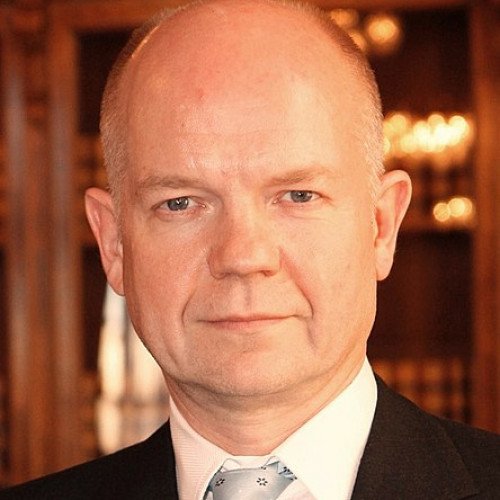 William Jefferson Hague, Baron Hague of Richmond, (born 26 March 1961) is a British Conservative politician and life peer. He represented Richmond, Yorkshire, as its Member of Parliament (MP) from 1989 until 2015 and was the Leader of the Opposition from 1997 to 2001. He was Secretary of State for Foreign and Commonwealth Affairs from 2010 to 2014 and was the Leader of the House of Commons from 2014 to 2015. Hague was educated at Wath Comprehensive School, the University of Oxford and INSEAD, subsequently being returned to the House of Commons at a by-election in 1989. Hague quickly rose through the ranks of the government of John Major and was appointed to Cabinet in 1995 as Secretary of State for Wales. Following the Conservatives' defeat at the 1997 general election by the Labour Party, he was elected Leader of the Conservative Party at the age of 36. Hague resigned as Conservative leader after the 2001 general election following his party's second defeat, at which the Conservatives made a net gain of just one seat. He returned to the backbenches, pursuing a career as an author, writing biographies of William Pitt the Younger and William Wilberforce. He also held several directorships, and worked as a consultant and public speaker. After David Cameron was elected Leader of the Conservative Party in 2005, Hague was reappointed to the Shadow Cabinet as Shadow Foreign Secretary. He also assumed the role of "Senior Member of the Shadow Cabinet", serving as Cameron's deputy. After the formation of the Coalition Government in 2010, Hague was appointed First Secretary of State and Foreign Secretary. Cameron described him as his "de facto political deputy". On 14 July 2014, Hague stood down as Foreign Secretary and became Leader of the House of Commons. He did not stand for re-election at the 2015 general election. He was awarded a life peerage in the 2015 Dissolution Honours List on 9 October 2015.