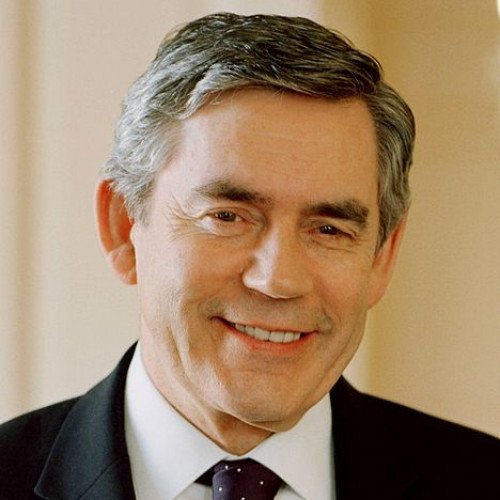 James Gordon Brown (born 20 February 1951) is a British politician who was Prime Minister of the United Kingdom and Leader of the Labour Party from 2007 to 2010. He served as Chancellor of the Exchequer in the Blair government from 1997 to 2007. Brown was Member of Parliament (MP) from 1983 to 2015, first for Dunfermline East and later for Kirkcaldy and Cowdenbeath. As of 2021, he is the most recent Labour prime minister. A doctoral graduate, Brown read history at the University of Edinburgh, where he was elected Rector of the University of Edinburgh in 1972. He spent his early career working as both a lecturer at a further education college and a television journalist. He entered the British House of Commons in 1983 as the MP for Dunfermline East. He joined the Shadow Cabinet in 1989 as Shadow Secretary of State for Trade, and was later promoted to become Shadow Chancellor of the Exchequer in 1992. After Labour's victory in 1997, he was appointed Chancellor of the Exchequer, becoming the longest-serving holder of that office in modern history. Brown's tenure as Chancellor was marked by major reform of Britain's monetary and fiscal policy architecture, transferring interest rate setting powers to the Bank of England, by a wide extension of the powers of the Treasury to cover much domestic policy and by transferring responsibility for banking supervision to the Financial Services Authority. Brown presided over the longest period of sustained economic growth in British history, but this became increasingly dependent on mounting debt, and part of this growth period started under the preceding Conservative government in 1993. Controversial moves included the abolition of advance corporation tax (ACT) relief in his first budget, the sale of UK gold reserves from 1999 to 2002, and the removal in his final budget of the 10% "starting rate" of personal income tax which he had introduced in 1999. In 2007, Tony Blair resigned as Prime Minister and Labour Leader, and Brown was elected unopposed to replace him. Brown's government introduced rescue packages in 2008 and 2009 to help keep the banks afloat during the global financial crisis, and as a result the United Kingdom's national debt increased dramatically. The Government took majority shareholdings in Northern Rock and Royal Bank of Scotland, both of which experienced financial difficulties, and injected large amounts of money into several other banks, including Lloyds Banking Group, which formed through the acquisition of HBOS by Lloyds TSB in 2009. In 2008, Brown's government passed the world's first Climate Change Act. Despite initial rises in opinion polls after Brown became Prime Minister, Labour's popularity declined with the onset of a recession in 2008, leading to poor results in the local and European elections in 2009. In the 2010 general election, Labour lost 91 seats, the party's biggest loss of seats in a single general election since 1931, resulting in a hung parliament in which the Conservatives were the largest party. After the Conservative Party formed a coalition government with the Liberal Democrats, Brown was succeeded as Prime Minister by David Cameron. Brown later played a prominent role in the campaign to maintain the union during the 2014 Scottish independence referendum. 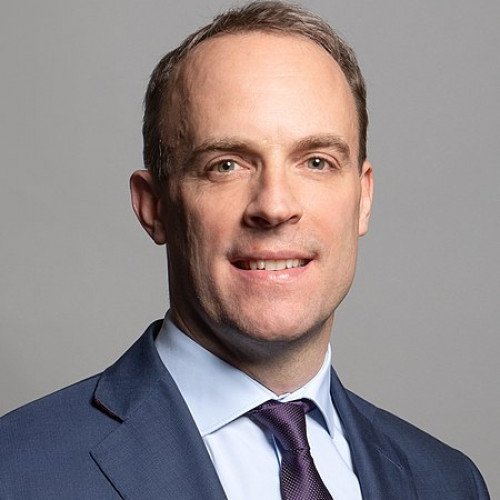 Dominic Rennie Raab (born 25 February 1974) is a British politician serving as First Secretary of State and Secretary of State for Foreign, Commonwealth and Development Affairs since July 2019. A member of the Conservative Party, he has also been the Member of Parliament (MP) for Esher and Walton since 2010. Raab was born in Buckinghamshire and attended Dr Challoner's Grammar School before studying law at Lady Margaret Hall, Oxford and Jesus College, Cambridge. Raab worked in London at Linklaters and the human rights organisation Liberty, and in Brussels advising on law in the European Union and the World Trade Organization. Raab joined Her Majesty's Diplomatic Service in 2000 where he was a lawyer in The Hague. After returning to London, he was an adviser to the Foreign and Commonwealth Office (FCO) on the Arab–Israeli conflict, the EU and Gibraltar. From 2006 to 2010, he worked in Parliament as Chief of Staff to Shadow Home Secretary David Davis and to Shadow Justice Secretary Dominic Grieve, before being elected to the British House of Commons in 2010. In 2015, David Cameron appointed Raab as Parliamentary Under-Secretary of State at the Ministry of Justice. When Theresa May appointed her first government a year later, he returned to the backbenches. Following the 2017 general election, he was appointed Minister of State for Courts and Justice. Raab moved to the role of Minister of State for Housing and Planning when the government was reshuffled in January 2018.In July 2018, May promoted Raab to his first Cabinet role, becoming Secretary of State for Exiting the European Union following the resignation of David Davis. However, just two weeks later, Raab was deputised by May to negotiate Britain's departure from the European Union, feeling more comfortable to lead the Brexit negotiations with the EU, while Raab would instead oversee domestic preparations. Four months later, Raab resigned as Brexit Secretary in opposition to May's draft Brexit withdrawal agreement. After May resigned in May 2019, Raab ran to succeed her in the Conservative Party leadership election. He was eliminated in the second ballot of Conservative MPs and endorsed Boris Johnson, who went on to win. On 24 July 2019, Johnson appointed Raab Secretary of State for Foreign and Commonwealth Affairs and First Secretary of State. In September 2020, Raab was awarded the duties of the former post of International Development Secretary in addition to his role as Foreign Secretary.