Gavin Christopher Newsom (born October 10, 1967) is an American politician and businessman who is the 40th governor of California, serving since January 2019. A member of the Democratic Party, he previously served as the 49th lieutenant governor of California from 2011 to 2019 and as the 42nd mayor of San Francisco from 2004 to 2011. Newsom attended Redwood High School and graduated from Santa Clara University. After graduation, he founded the PlumpJack wine store with a family friend Gordon Getty as an investor. The PlumpJack Group grew to manage 23 businesses, including wineries, restaurants, and hotels. Newsom began his political career in 1996 when San Francisco Mayor Willie Brown appointed him to serve on the city's Parking and Traffic Commission. Brown appointed Newsom to fill a vacancy on the Board of Supervisors the following year, and Newsom was later elected to the board in 1998, 2000, and 2002.In 2003, at the age of 36, Newsom was elected the 42nd Mayor of San Francisco, becoming the city's youngest mayor in a century. Newsom was re-elected in 2007 with 72% of the vote. Newsom was elected Lieutenant Governor of California in 2010 and was re-elected in 2014. He was elected Governor of California in the 2018 election. Newsom hosted The Gavin Newsom Show on Current TV and wrote the 2013 book Citizenville. 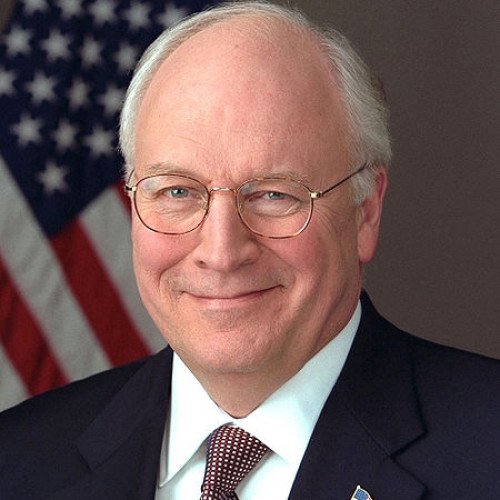 Richard Bruce Cheney ( CHAY-nee; born January 30, 1941) is an American politician and businessman who served as the 46th vice president of the United States from 2001 to 2009 under George W. Bush. He has been cited as the most powerful vice president in American history. He is also one of the most unpopular politicians in the history of the U.S., holding an approval rating of just 13% at the time of leaving office.Born in Lincoln, Nebraska, Cheney grew up there and later in Casper, Wyoming. He attended Yale and then the University of Wyoming, at the latter of which he earned a BA and an MA in Political Science. He began his political career as an intern for Congressman William A. Steiger, eventually working his way into the White House during the Nixon and Ford administrations. He served as White House chief of staff from 1975 to 1977. In 1978, Cheney was elected to the U.S. House of Representatives. He represented Wyoming's at-large congressional district from 1979 to 1989, briefly serving as House minority whip in 1989. Cheney was selected to be the secretary of defense during the presidency of George H. W. Bush, holding the position for the majority of Bush's term from 1989 to 1993. During his time in the Department of Defense, Cheney oversaw the 1991 Operation Desert Storm, among other actions. Out of office during the Clinton administration, Cheney was the Chairman and CEO of Halliburton Company from 1995 to 2000. In July 2000, Cheney was chosen by presumptive Republican presidential nominee George W. Bush as his running mate in the 2000 presidential election. They defeated their Democratic opponents, incumbent Vice President Al Gore and Senator Joe Lieberman. In 2004 Cheney was reelected to his second term as vice president with Bush as president, defeating their Democratic opponents Senators John Kerry and John Edwards. During Cheney's tenure as vice president, he played a leading behind-the-scenes role in the George W. Bush administration's response to the September 11 attacks and coordination of the Global War on Terrorism. He was an early proponent of invading Iraq, alleging that the Saddam Hussein regime possessed a weapons of mass destruction program (no active WMDs were in Iraq) and the Hussein regime had an operational relationship with Al-Qaeda (even though there was scant credible evidence of such a relationship at the time). He also pressured the intelligence community to provide intelligence consistent with the administration's rationales for invading Iraq. Cheney was often criticized for the Bush Administration's policies regarding the campaign against terrorism, and for his support of wiretapping by the National Security Agency (NSA) and of torture. He became at odds with President Bush's position against same-sex marriage in 2004.