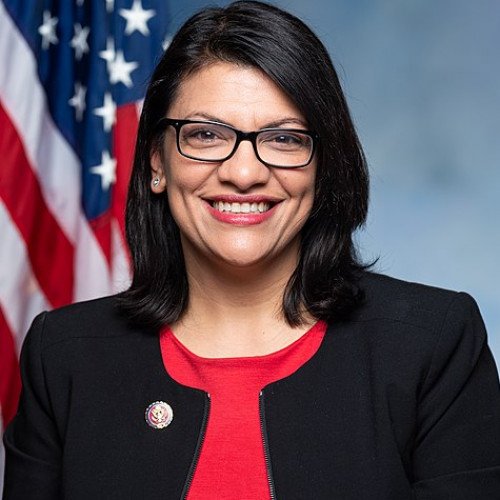 Rashida Harbi Tlaib (; born July 24, 1976) is an American politician and lawyer serving as the U.S. Representative for Michigan's 13th congressional district since 2019. The district includes the western half of Detroit, along with several of its western suburbs and much of the Downriver area. A member of the Democratic Party, Tlaib represented the 6th and 12th districts of the Michigan House of Representatives before her election to Congress.In 2018, Tlaib won the Democratic nomination for the United States House of Representatives seat from Michigan's 13th congressional district. She ran unopposed in the general election and became the first woman of Palestinian descent in Congress, the first Muslim woman to serve in the Michigan legislature, and one of the first two Muslim women elected to Congress, along with Ilhan Omar (D-MN). Tlaib is a member of The Squad, an informal group of four women U.S. Representatives on the left wing of the Democratic Party.Tlaib is a member of the Democratic Socialists of America (DSA). She and Alexandria Ocasio-Cortez (D-NY) are the first female DSA members to serve in Congress. Tlaib has been a vocal critic of the Trump administration and advocated Trump's impeachment. On foreign affairs, she has sharply criticized the Israeli government, called for an end to U.S. aid to Israel, and expressed support for the Boycott, Divestment and Sanctions campaign. 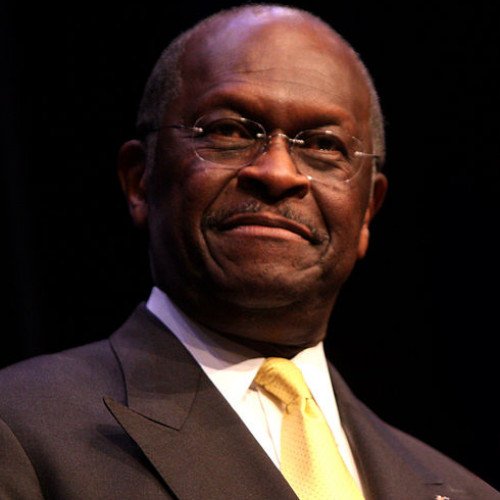 Herman Cain (December 13, 1945 – July 30, 2020) was an American businessman and activist for the Tea Party movement within the Republican Party. Born in Memphis, Tennessee, Cain grew up in Georgia and graduated from Morehouse College with a bachelor's degree in mathematics. He then earned a master's degree in computer science at Purdue University while also working full-time for the U.S. Department of the Navy. In 1977, he joined the Pillsbury Company where he later became vice president. During the 1980s, Cain's success as a business executive at Burger King prompted Pillsbury to appoint him as chairman and CEO of Godfather's Pizza, in which capacity he served from 1986 to 1996. Cain was chairman of the Federal Reserve Bank of Kansas City Omaha Branch from 1989 to 1991. He was deputy chairman, from 1992 to 1994, and then chairman until 1996, of the Federal Reserve Bank of Kansas City. In 1995, he was appointed to the Kemp Commission and, in 1996, he served as a senior economic adviser to Bob Dole's presidential campaign. From 1996 to 1999, Cain served as president and CEO of the National Restaurant Association. In May 2011, Cain announced his 2012 presidential candidacy. By the fall, his proposed 9–9–9 tax plan and debating performances had made him a serious contender for the Republican nomination. In November, however, his campaign faced allegations of sexual misconduct, which he denied. He announced the suspension of his campaign on December 3, but remained involved in politics. In the 2020 election cycle, Cain was a co-chairman of Black Voices for Trump. Cain died from COVID-19 on July 30, 2020, at the age of 74.