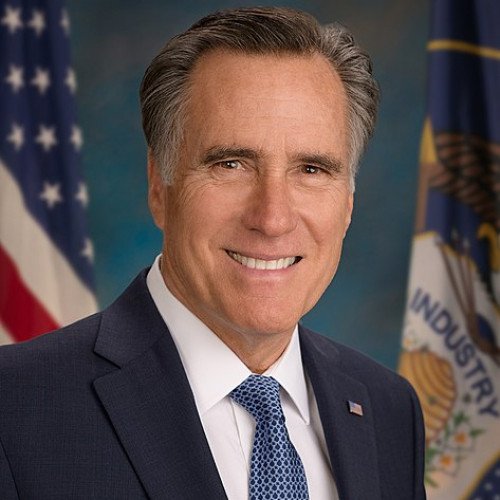 Willard Mitt Romney (born March 12, 1947) is an American politician, businessman and former presidential candidate who has served as the junior United States senator from Utah since January 2019. He previously served as the 70th governor of Massachusetts from 2003 to 2007 and was the Republican Party's nominee for president of the United States in the 2012 election. Raised in Bloomfield Hills, Michigan, by his parents, George and Lenore Romney, he spent over two years from 1966 in France as a Mormon missionary. He married Ann Davies in 1969; they have five sons. By 1971, he had participated in the political campaigns of both parents. In 1971 Romney graduated as a Bachelor of Arts in English from Brigham Young University (BYU) and in 1975 gained the JD–MBA degree from Harvard. Romney became a management consultant and in 1977 joined Bain &amp; Company in Boston. As Bain's chief executive officer (CEO), he later helped lead the company out of a financial crisis. In 1984, he co-founded and led the spin-off company Bain Capital, a private equity investment firm that became one of the largest of its kind in the nation. Active in The Church of Jesus Christ of Latter-day Saints (LDS Church) throughout his adult life, Romney served as bishop of his ward and later as a stake president, for an area covering Boston and many of its suburbs. After stepping down from Bain Capital and his local leadership role in the LDS Church, Romney ran as the Republican candidate in the 1994 United States Senate election in Massachusetts. After losing to longtime incumbent Ted Kennedy, he resumed his position at Bain Capital. Years later, a successful stint as president and CEO of the then-struggling Salt Lake Organizing Committee for the 2002 Winter Olympics led to a re-launch of his political career. Elected Governor of Massachusetts in 2002, Romney helped develop and later signed a health care reform law (commonly referred to as "Romneycare") that provided near-universal health insurance access through state-level subsidies and individual mandates to purchase insurance. He also presided over the elimination of a projected $1.2–1.5 billion deficit through a combination of spending cuts, increased fees and closing corporate tax loopholes. He did not seek re-election in 2006, instead focusing on his campaign for the Republican nomination in the 2008 U.S. presidential election. Though he won several primaries and caucuses, Romney ultimately lost the nomination to Senator John McCain. Romney's considerable net worth, estimated in 2012 at $190–250 million, helped finance his political campaigns prior to 2012. Romney again ran for and won the Republican presidential nomination in 2012, becoming the first Mormon to be a presidential nominee of a major party. He was defeated by incumbent Democratic President Barack Obama in the 2012 presidential election, losing the Electoral College by a margin of 206–332 and the popular vote by a margin of 47–51%. After re-establishing residency in Utah, Romney announced his campaign for the U.S. Senate seat held by the retiring Orrin Hatch in the 2018 election; he defeated state representative Mike Kennedy in the Republican primary and Democrat Jenny Wilson in the general election. In doing so, he became only the third individual ever to be elected governor of one state and U.S. senator for another state (the others being Sam Houston and William Bibb). Romney was sworn in on January 3, 2019. In the impeachment trial of Donald Trump, he voted to convict the president of abuse of power (over Trump's attempts to get Ukrainian President Volodymyr Zelensky to announce an investigation into his political rival Joe Biden), becoming the first and only senator in U.S. history to vote to convict a president of his own party. 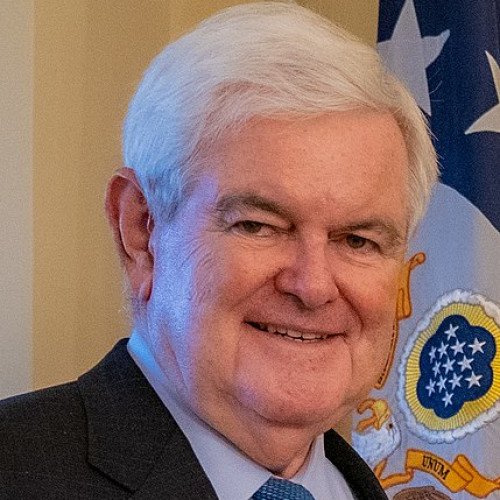 Newton Leroy "Newt" Gingrich (; né McPherson; born June 17, 1943) is an American politician and author who served as the 50th Speaker of the United States House of Representatives from 1995 to 1999. A member of the Republican Party, he was the U.S. Representative for Georgia's 6th congressional district serving north Atlanta and nearby areas from 1979 until his resignation in 1999. In 2012, Gingrich unsuccessfully ran for the Republican nomination for President of the United States. A professor of history and geography at the University of West Georgia in the 1970s, Gingrich won election to the U.S. House of Representatives in November 1978, the first Republican in the history of Georgia's 6th congressional district to do so. He served as House Minority Whip from 1989 to 1995. A co-author and architect of the "Contract with America", Gingrich was a major leader in the Republican victory in the 1994 congressional election. In 1995, Time named him "Man of the Year" for "his role in ending the four-decades-long Democratic majority in the House".As House Speaker, Gingrich oversaw passage by the House of welfare reform and a capital gains tax cut in 1997. Gingrich played a key role in several government shutdowns, and impeached President Clinton on a party-line vote in the House. The poor showing by Republicans in the 1998 Congressional elections, a reprimand from the House for Gingrich's ethics violation, pressure from Republican colleagues, and revelations of an extramarital affair with a congressional employee 23 years his junior resulted in Gingrich's resignation from the speakership on November 6, 1998. He resigned altogether from the House on January 3, 1999. Political scientists have credited Gingrich with playing a key role in undermining democratic norms in the United States and hastening political polarization and partisanship.Since leaving the House, Gingrich has remained active in public policy debates and worked as a political consultant. He founded and chaired several policy think tanks, including American Solutions for Winning the Future and the Center for Health Transformation. Gingrich ran for the Republican nomination for President in the 2012 presidential election, and was considered a potential frontrunner at several points in the race. Despite an impressive late victory in the South Carolina primary, Gingrich was ultimately unable to win enough primaries to sustain a viable candidacy, he withdrew from the race in May 2012 and endorsed eventual nominee Mitt Romney. Gingrich later emerged as a key ally of Donald Trump, and was reportedly among the finalists on Trump's short list for running mate in the 2016 election.