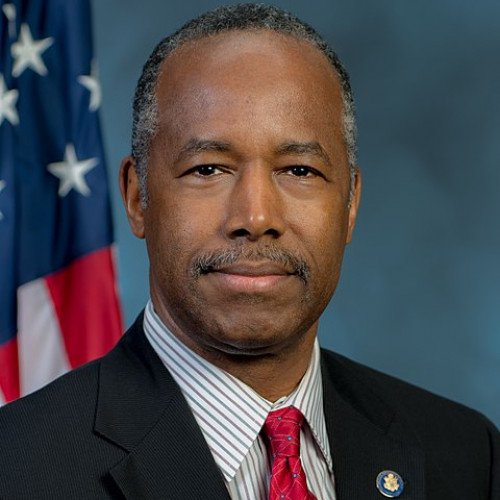 Benjamin Solomon Carson Sr. (born September 18, 1951) is an American politician, author, and retired neurosurgeon who served as the 17th United States Secretary of Housing and Urban Development from 2017 to 2021. He was a candidate for President of the United States in the 2016 Republican primaries. He is considered a pioneer in the field of neurosurgery.Carson became the Director of Pediatric Neurosurgery at the Johns Hopkins Children’s Center in 1984 at age 33; he was the youngest chief of pediatric neurosurgery in the United States. At retirement, he was professor of neurosurgery, oncology, plastic surgery, and pediatrics at the Johns Hopkins School of Medicine. Carson's achievements include participating in the first reported separation of conjoined twins joined at the back of the head. Although surgically a success, the twins continued to suffer neurologic/medical complications. Additional accomplishments include performing the first successful neurosurgical procedure on a fetus inside the womb; developing new methods to treat brain-stem tumors; and revitalizing hemispherectomy techniques for controlling seizures. He wrote over 100 neurosurgical publications. He retired from medicine in 2013. Carson gained national fame among political conservatives after delivering a speech at the 2013 National Prayer Breakfast which was perceived as critical of the policies of President Barack Obama. Following widespread speculation of a presidential run, Carson officially announced his campaign for the 2016 Republican nomination for President in May 2015. Carson performed strongly in early polls, leading to him being considered a frontrunner for the nomination during the fall of 2015; however, his polling support began to decline following scrutiny of his foreign policy credentials after the November 2015 Paris attacks. Carson withdrew from the race after Super Tuesday, following a string of disappointing primary results, and endorsed Donald Trump. Following Trump's victory, Trump nominated Carson as Secretary of Housing and Urban Development, being confirmed by the United States Senate in a 58–41 vote on March 2, 2017. Carson has also been seen as a "symbol" of black conservatism.Carson has received numerous honors for his neurosurgery work, including more than 60 honorary doctorate degrees and numerous national merit citations. In 2001, he was named by CNN and TIME magazine as one of the nation's 20 foremost physicians and scientists, and was selected by the Library of Congress as one of 89 "Living Legends" on its 200th anniversary. In 2008, Carson was bestowed the Presidential Medal of Freedom, the highest civilian award in the United States. In 2010, he was elected into the National Academy of Medicine. He was the subject of the 2009 TV film Gifted Hands: The Ben Carson Story, where he was portrayed by Cuba Gooding Jr. 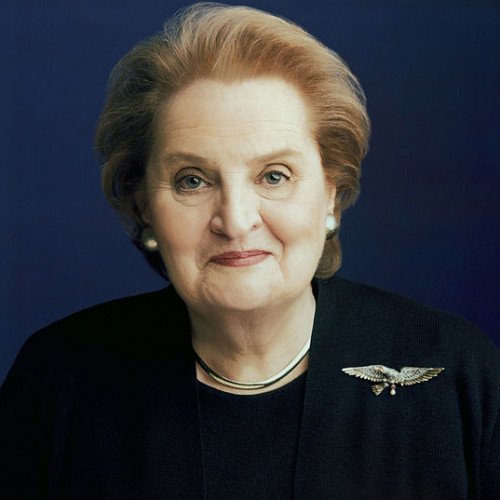 Madeleine Jana Korbel Albright (born Marie Jana Korbelová; May 15, 1937) is an American politician and diplomat who served as the first female United States Secretary of State in U.S. history from 1997 to 2001 under President Bill Clinton.Along with her family, Albright immigrated to the United States in 1948 from Czechoslovakia. Her father, diplomat Josef Korbel, settled the family in Denver, Colorado, and she became a U.S. citizen in 1957. Albright graduated from Wellesley College in 1959 and earned a PhD from Columbia University in 1975, writing her thesis on the Prague Spring. She worked as an aide to Senator Edmund Muskie before taking a position under Zbigniew Brzezinski on the National Security Council. She served in that position until 1981, when President Jimmy Carter left office.After leaving the National Security Council, Albright joined the academic faculty of Georgetown University and advised Democratic candidates regarding foreign policy. After Clinton's victory in the 1992 presidential election, Albright helped assemble his National Security Council. In 1993, Clinton appointed her to the position of U.S. Ambassador to the United Nations. She held that position until 1997, when she succeeded Warren Christopher as Secretary of State. Albright served in that capacity until Clinton left office in 2001. Albright has served as chair of the Albright Stonebridge Group since 2009. She is the Michael and Virginia Mortara Endowed Distinguished Professor in the Practice of Diplomacy at Georgetown University's School of Foreign Service. In May 2012, she was awarded the Presidential Medal of Freedom by U.S. President Barack Obama. Secretary Albright also serves on the board of the Council on Foreign Relations.