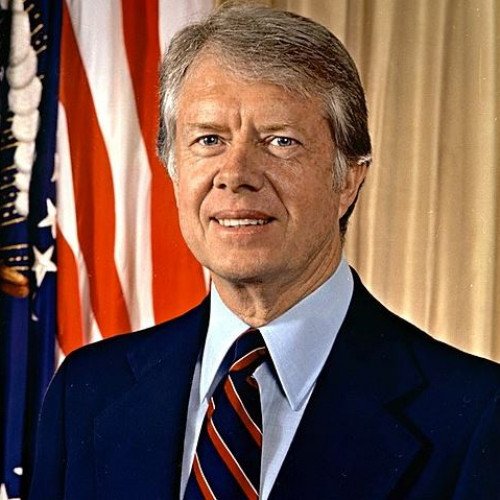 James Earl Carter Jr. (born October 1, 1924) is an American politician and philanthropist who served as the 39th president of the United States from 1977 to 1981. A member of the Democratic Party, he previously served as a Georgia State Senator from 1963 to 1967 and as the 76th governor of Georgia from 1971 to 1975. Since leaving the presidency, Carter has remained engaged in political and social projects as a private citizen. In 2002, he was awarded the Nobel Peace Prize for his work in co-founding the Carter Center. Raised in Plains, Georgia, Carter graduated from the United States Naval Academy in 1946 with a Bachelor of Science degree and joined the United States Navy, where he served on submarines. After the death of his father in 1953, Carter left his naval career and returned home to Georgia to take up the reins of his family's peanut-growing business. Carter inherited comparatively little due to his father's forgiveness of debts and the division of the estate among the children. Nevertheless, his ambition to expand and grow the Carters' peanut business was fulfilled. During this period, Carter was motivated to oppose the political climate of racial segregation and support the growing civil rights movement. He became an activist within the Democratic Party. From 1963 to 1967, Carter served in the Georgia State Senate, and in 1970, he was elected as Governor of Georgia, defeating former Governor Carl Sanders in the Democratic primary on an anti-segregation platform advocating affirmative action for ethnic minorities. Carter remained as governor until 1975. Despite being a dark-horse candidate who was little known outside of Georgia at the start of the campaign, Carter won the 1976 Democratic presidential nomination. In the general election, Carter ran as an outsider and narrowly defeated incumbent Republican President Gerald Ford. On his second day in office, Carter pardoned all the Vietnam War draft evaders by issuing Proclamation 4483. During Carter's term as president, two new cabinet-level departments, the Department of Energy and the Department of Education, were established. He established a national energy policy that included conservation, price control, and new technology. In foreign affairs, Carter pursued the Camp David Accords, the Panama Canal Treaties, the second round of Strategic Arms Limitation Talks (SALT II), and the return of the Panama Canal Zone to Panama. On the economic front, he confronted stagflation, a persistent combination of high inflation, high unemployment and slow growth. The end of his presidential tenure was marked by the 1979–1981 Iran hostage crisis, the 1979 energy crisis, the Three Mile Island nuclear accident, and the Soviet invasion of Afghanistan. In response to the invasion, Carter escalated the Cold War when he ended détente, imposed a grain embargo against the Soviets, enunciated the Carter Doctrine, and led a 1980 Summer Olympics boycott in Moscow. In 1980, Carter faced a challenge from Senator Ted Kennedy in the primaries, but he won re-nomination at the 1980 Democratic National Convention. Carter lost the general election to Republican nominee Ronald Reagan in an electoral landslide. He is the only president in American history to serve a full term of office and never appoint a justice to the Supreme Court. Polls of historians and political scientists usually rank Carter as a below-average president. Carter's activities since leaving the presidency have been viewed more favorably than his presidency itself. In 1982, Carter established the Carter Center to promote and expand human rights. He has traveled extensively to conduct peace negotiations, monitor elections, and advance disease prevention and eradication in developing nations. Carter is considered a key figure in the Habitat for Humanity charity. He has written over 30 books, ranging from political memoirs to poetry, while continuing to actively comment on ongoing American and global affairs such as the Israeli-Palestinian conflict. 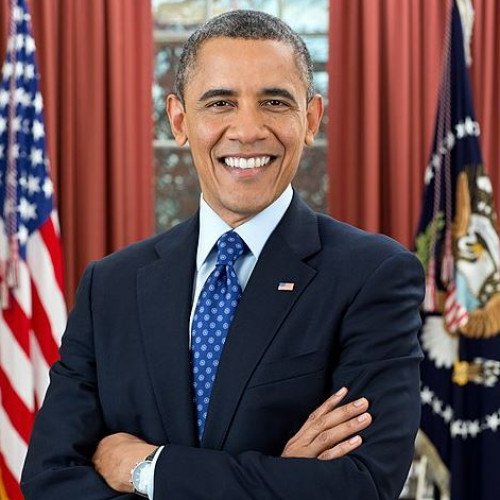 Barack Hussein Obama II ( (listen) bə-RAHK hoo-SAYN oh-BAH-mə; born August 4, 1961) is an American politician and attorney who served as the 44th president of the United States from 2009 to 2017. A member of the Democratic Party, Obama was the first African-American president of the United States. He previously served as a U.S. senator from Illinois from 2005 to 2008 and an Illinois state senator from 1997 to 2004. Obama was born in Honolulu, Hawaii. After graduating from Columbia University in 1983, he worked as a community organizer in Chicago. In 1988, he enrolled in Harvard Law School, where he was the first black person to be president of the Harvard Law Review. After graduating, he became a civil rights attorney and an academic, teaching constitutional law at the University of Chicago Law School from 1992 to 2004. Turning to elective politics, he represented the 13th district from 1997 until 2004 in the Illinois Senate, when he ran for the U.S. Senate. Obama received national attention in 2004 with his March Senate primary win, his well-received July Democratic National Convention keynote address, and his landslide November election to the Senate. In 2008, he was nominated for president a year after his presidential campaign began, and after a close primary campaign against Hillary Clinton, Obama was elected over Republican nominee John McCain and was inaugurated alongside Joe Biden on January 20, 2009. Nine months later, he was named the 2009 Nobel Peace Prize laureate. Obama signed many landmark bills into law during his first two years in office. The main reforms that were passed include the Affordable Care Act (commonly referred to as ACA or "Obamacare"), although without a public health insurance option, the Dodd–Frank Wall Street Reform and Consumer Protection Act, and the Don't Ask, Don't Tell Repeal Act of 2010. The American Recovery and Reinvestment Act of 2009 and Tax Relief, Unemployment Insurance Reauthorization, and Job Creation Act of 2010 served as economic stimuli amidst the Great Recession. After a lengthy debate over the national debt limit, he signed the Budget Control and the American Taxpayer Relief Acts. In foreign policy, he increased U.S. troop levels in Afghanistan, reduced nuclear weapons with the United States–Russia New START treaty, and ended military involvement in the Iraq War. He ordered military involvement in Libya for the implementation of the UN Security Council Resolution 1973, contributing to the overthrow of Muammar Gaddafi. He also ordered the military operations that resulted in the deaths of Osama bin Laden and suspected Yemeni Al-Qaeda operative Anwar al-Awlaki. After winning re-election by defeating Republican opponent Mitt Romney, Obama was sworn in for a second term in 2013. During this term, he promoted inclusion for LGBT Americans. His administration filed briefs that urged the Supreme Court to strike down same-sex marriage bans as unconstitutional (United States v. Windsor and Obergefell v. Hodges); same-sex marriage was legalized nationwide in 2015 after the Court ruled so in Obergefell. He advocated for gun control in response to the Sandy Hook Elementary School shooting, indicating support for a ban on assault weapons, and issued wide-ranging executive actions concerning global warming and immigration. In foreign policy, he ordered military intervention in Iraq in response to gains made by ISIL after the 2011 withdrawal from Iraq, continued the process of ending U.S. combat operations in Afghanistan in 2016, promoted discussions that led to the 2015 Paris Agreement on global climate change, initiated sanctions against Russia following the invasion in Ukraine and again after Russian interference in the 2016 United States elections, brokered the JCPOA nuclear deal with Iran, and normalized U.S. relations with Cuba. Obama nominated three justices to the Supreme Court: Sonia Sotomayor and Elena Kagan were confirmed as justices, while Merrick Garland faced partisan obstruction from the Republican-led Senate led by Mitch McConnell, which never held hearings or a vote on the nomination. Obama left office in January 2017 and continues to reside in Washington, D.C.During Obama's term in office, the United States' reputation abroad, as well as the American economy, significantly improved. His presidency has generally been regarded favorably, and evaluations of his presidency among historians, political scientists, and the general public frequently place him among the upper tier of American presidents.