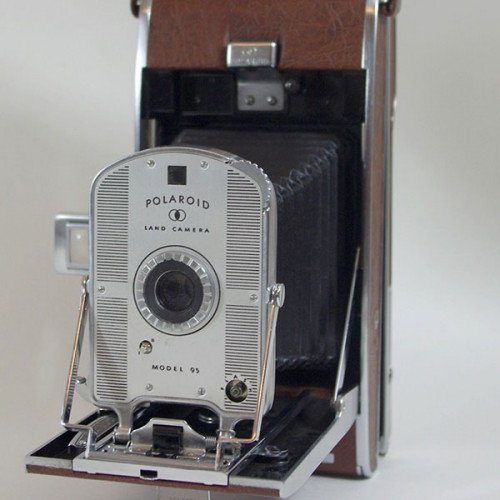 The first Polaroid Land Camera, it was the first commercially successful instant-picture camera that developed the photo inside the camera with no user intervention. The brainchild of Dr. Edwin Land and manufactured by Polaroid Corp. of Cambridge, Massachusetts, it created a sensation when announced in 1947 and became an instant success when it went on sale in 1948. It was a robust, beautifully made, brown-leather-covered folding camera providing eight 2-1/2 x 41/4 “pictures in a minute” per roll using the patented diffusion transfer process. After loading the film and pulling out a paper leader to position the first frame, you took the picture, then pulled the paper leader again to draw the exposed negative along with the print paper, through the rollers. This burst a pod of viscous processing agent (combined developer and fixer) and spread it evenly between the two strips, developing the negative image. The unused silver salts, made soluble by the fixer, diffused into the receiving layer of the print paper, where they were reduced to silver. The whole process took one minute and, at the end, you opened a flap at the back of the camera and peeled the deckled-edge, sepia-colored print away from the negative strip, which was discarded. In 1950, a new orthochromatic black-and-white Polaroid film with more neutral tones replaced the earlier brownish material, but it required a protective coating after removal from a camera, so an applicator with neutralizing lacquer was furnished with each roll. The Polaroid 95 was so successful that it remained in production with only minor changes until 1961. All models feature heavy cast-aluminum construction and folding bed. The original Polaroid 95 (1948-1953) has a 135mm triplet lens with apertures from f/11 to f/45, and shutter speeds from 1/8 to 1/160 sec, both controlled by a single dial calibrated in Polaroid’s own light-value system (1 to 8). Other features: Flip up optical viewfinder, focusing lever on bed, and built-in flash sync. The phenomenal success of the Polaroid 95 made Polaroid a household name and a legendary stock market phenomenon and paved the way for what became the world’s most successful film-based system of instant-picture photography. 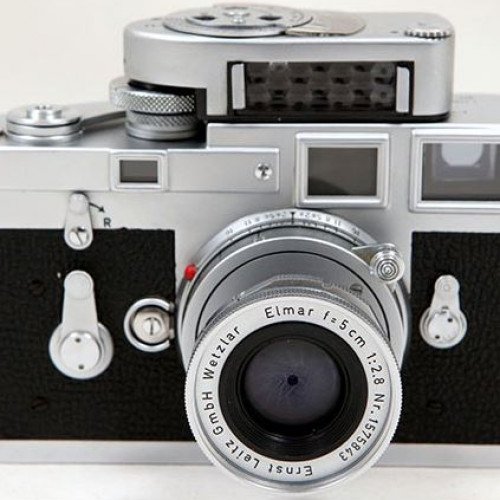 Widely hailed as the finest interchangeable-lens 35mm rangefinder camera ever made, the Leica M3 was the most advanced rangefinder 35 of its day. Its most significant advances: a magnificent long base (68.5mm) nearly life-size (0.92x) combined range/viewfinder with true projected, parallax-compensating, auto-indexing framelines for 50mm, 90mm, and 135mm lenses, the M-type bayonet mount, a two-stroke film-advance lever (later modified to provide single-stroke operation), and a hinged back section to facilitate cleaning, shutter checking, and film loading. A translucent light-collecting window in between the rangefinder and viewfinder windows provides illumination for the bright, crisp white finder framelines, and a frameline-selector lever below the front viewfinder window lets you previsualize the effect of mounting other lenses. The integration of its components is brilliant. It’s rubberized, 1-1/1000 sec plus B, cloth focal plane shutter is whisper quiet. Its contours mold seamlessly to your hands, and its shutter release, wind lever, and focusing mount operate with silky precision. It is hardly surprising that the Leica M10, the latest digital version of the M-series Leica, hews closely to the original Leica M3 design concept.