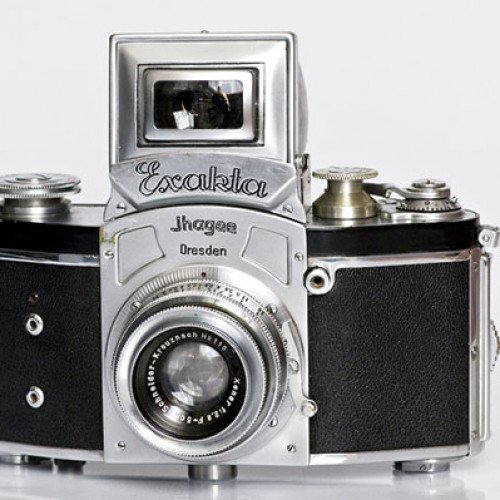 The Kine Exakta I (early models had an “Exacta” nameplate), made by Ihagee Kamerawerk, Steenbergen & Co. Dresden, Germany was the first widely distributed 35mm single-lens reflex camera and its basic configuration influenced the legions of 35mm SLRs that succeeded it. It was called Kine because it used 35mm cine film. Its distinctive design is based on a trapezoidal-shaped body with left-handed single-long-stroke film-advance lever, left-handed shutter release and flip-up waist-level viewfinder, but it still works like a modern 35mm SLR. Its horizontal-travel, cloth, focal-plane shutter has speeds from 12-1/1000 sec, the non-removable waist-level finder has a convex ground-glass screen with round flip-down, critical-focusing magnifier (the second version of c1937 had a rectangular magnifier). Other features: Removable back, self-timer, built-in flash sync with two front -mounted terminals, film-cutting knife(!), shutter-locking safety device on folding finder, and a removable take-up spool. Early lenses had manual or pre-set diaphragms. Despite its charming quirks, the Exakta was a pioneering camera and its impressive aggregation of lenses, finders, and accessories made it the first 35mm SLR to evolve into a true system camera. 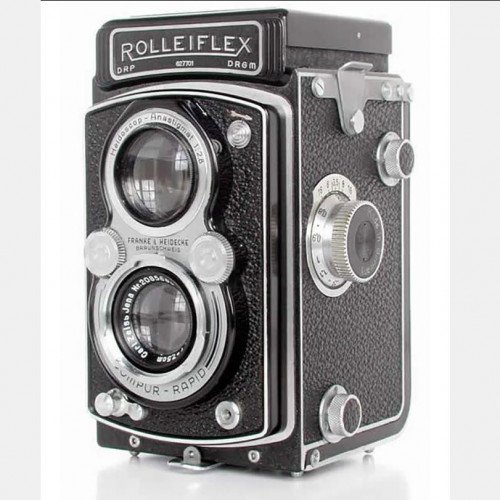 One of the most beautifully integrated optical-mechanical creations of all time, the landmark Rolleiflex Automat of 1937 provided the solid foundation upon which all subsequent Rolleiflex 6x6cm (2-1/4 square) twin-lens reflexes (TLRs) were built. It also had a great influence on TLR design worldwide. The Automat’s impressive feature array includes: milled aperture- and shutter-speed-setting wheels nestled in between the lenses that read out conveniently in a little window atop the viewing lens, right-hand film-wind crank with automatic first frame positioning and frame counting via an ingenious friction roller system built into the camera, waist-level viewfinder with automatic parallax compensation at all distances by means of a moving frame under the focusing screen coupled to the focusing mechanism, and a left-hand focusing knob with adjacent depth-of-field scale. An original Rolleiflex Automat in clean working condition is still a great user-collectible.