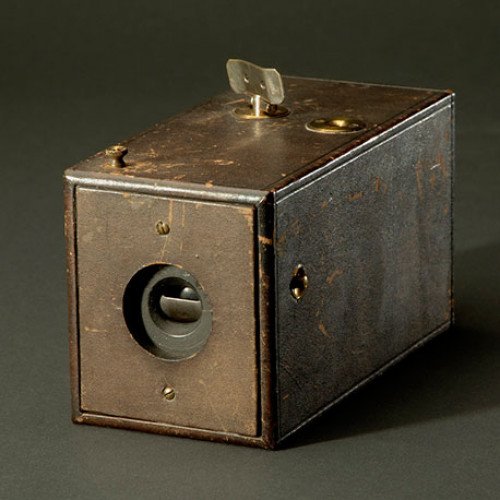 The first camera marketed by the Eastman Dry Plate & Film Co. of Rochester, New York, the Kodak may be the most historically important series-production camera ever made. For the first time it enabled ordinary people having no particular technical skill to capture satisfying photographs. Sold for the then-handsome sum of $25, it was an easy-to-use, portable box camera with no adjustments, that was pre-loaded with rollfilm sufficient for 100 exposures. When you finished the roll, you shipped the camera back to Eastman in Rochester, along with $10. They developed the film, transferred each negative to a sheet of glass for contact printing, made one print from each good negative, reloaded the camera with film for 100 more exposures, and returned it to the owner. In effect, the Kodak was the world’s first successful point-and-shoot camera and it also created the modern photofinishing industry. The Kodak produced circular pictures 2-1/2 inches in diameter on 2-3/4-inch-wide flexible rollfilm, had no frame counter (you had to count the number of turns when winding the film-advance key!) and no viewfinder—you aimed it with the aid of two lines, in a V pattern, engraved into the top. The lens, contained in a unique barrel-type shutter, was a 57mm f/9 Rapid Rectilinear. The shutter, which was manually cocked with a pull cord, provided a single shutter speed of about 1/25 sec, but a felt plug fitted over the lens could be used for making time exposures. The shutter-release button was on the left, a tripod socket oddly placed on the top – but with no viewfinder this hardly mattered! An original Kodak Camera is one of the holy grails of camera collecting and now verges on being a museum piece. 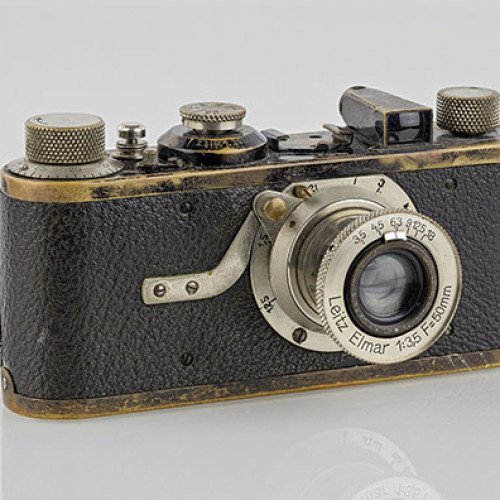 This is the camera that really put 35mm photography in the forefront. The Leica was not the first 35mm still camera, and it wasn’t even the first to employ the 24x36mm format, but it was the first high quality 35mm camera to be mass produced, and it established the basic shape and control layout of 35mm cameras, and the viability of the 35mm format. Its exquisitely compact, magnificently integrated, supremely ergomonic design had something to do with its success, but its fine performance as a picture taker was equally important. Its features incude a self-capping, horizontal-travel cloth focal-plane shutter with speeds of 1/20-1/500 sec plus T, a non-interchangeable, scale-focusing, collapsible, 4-element, 3-group 50mm f/3.5 Elmar lens, a film-wind-knob with concentric frame counter, a rewind knob, a small optical viewfinder on the top, and bottom loading by means of a removable baseplate. One of the Leica I’s best loved features was automatic blank- and double-exposure prevention—state-of-the-art in 1925. Today, the Leica I is the sine qua non of well-heeled Leica collectors.