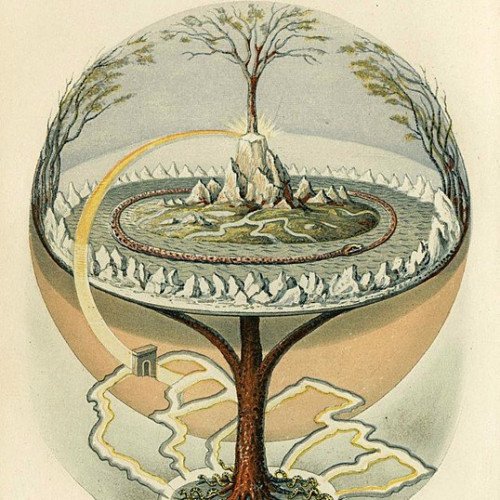 The world tree is a motif present in several religions and mythologies, particularly Indo-European religions, Siberian religions, and Native American religions. The world tree is represented as a colossal tree which supports the heavens, thereby connecting the heavens, the terrestrial world, and, through its roots, the underworld. It may also be strongly connected to the motif of the tree of life, but it is the source of wisdom of the ages. Specific world trees include égig érő fa in Hungarian mythology, Ağaç Ana in Turkic mythology, Modun in Mongol mythology, Yggdrasil in Norse mythology, Irminsul in Germanic mythology, the oak in Slavic, Finnish and Baltic, Iroko in Yoruba religion, Jianmu in Chinese mythology, and in Hindu mythology the Ashvattha (a Ficus religiosa). 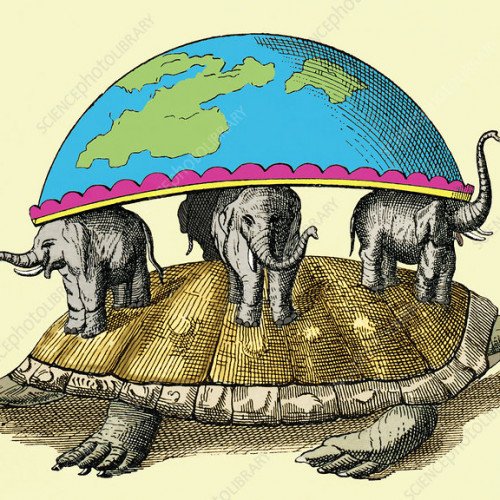 The "world-elephants" are mythical animals which appear in Hindu cosmology. The Amarakosha (5th century) lists the names of eight male elephants bearing the world (along with eight unnamed female elephants). The names listed are Airavata, Pundarika, Vamana, Kumunda, Anjana, Pushpa-danta, Sarva-bhauma, and Supratika. The names of four elephants supporting the earth from the four directions are given in the Ramayana : Viroopaaksha (east), Mahaapadma (south), Saumanasa (west), Bhadra (north).Brewer's Dictionary of Phrase and Fable lists Maha-pudma and Chukwa are names from a "popular rendition of a Hindu myth in which the tortoise Chukwa supports the elephant Maha-pudma, which in turn supports the world". The spelling Mahapudma originates as a misprint of Mahapadma in Sri Aurobindo's 1921 retelling of a story of the Mahabharata,The popular rendition of the World Turtle supporting one or several World Elephants is recorded in 1599 in a letter by Emanual de Veiga. Wilhelm von Humboldt claimed, without any proof, that the idea of a world-elephant maybe due to a confusion, caused by the Sanskrit noun Nāga having the dual meaning of "serpent" and "elephant" (named for its serpent-like trunk), thus representing a corrupted account of the world-serpent.