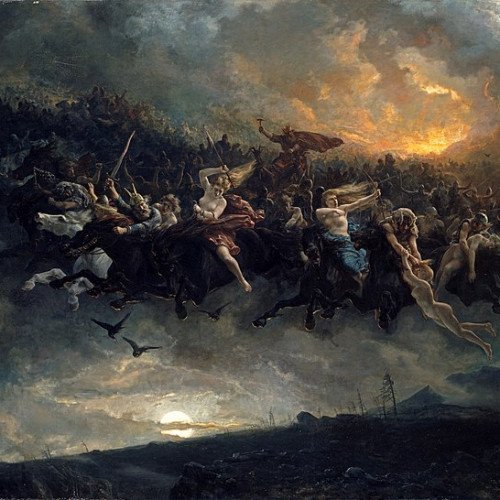 The Wild Hunt is a folklore motif (Motif E501 in Stith Thompson's Motif Index of Folklore) that historically occurs in the folklore of various Northern European cultures. Wild Hunts typically involve a "soul-raving" chase led by a mythological figure escorted by a ghostly or supernatural group of hunters passing in wild pursuit. The leader of the hunt is often a named figure associated with Odin in Germanic legends, but may variously be a historical or legendary figure like Theodoric the Great, the Danish king Valdemar Atterdag, the Welsh psychopomp Gwyn ap Nudd, biblical figures such as Herod, Cain, Gabriel, or the Devil, or an unidentified lost soul or spirit either male or female. The hunters are generally the souls of the dead or ghostly dogs, sometimes fairies, Valkyries, or elves.Seeing the Wild Hunt was thought to presage some catastrophe such as war or plague, or at best the death of the one who witnessed it. People encountering the Hunt might also be abducted to the underworld or the fairy kingdom. In some instances, it was also believed that people's spirits could be pulled away during their sleep to join the cavalcade.The concept was developed based on comparative mythology by Jacob Grimm in Deutsche Mythologie (1835) as a folkloristic survival of Germanic pagan tradition, but comparable folk myths are found throughout Northern, Western and Central Europe. Grimm popularised the term Wilde Jagd ("Wild Hunt") for the phenomenon. 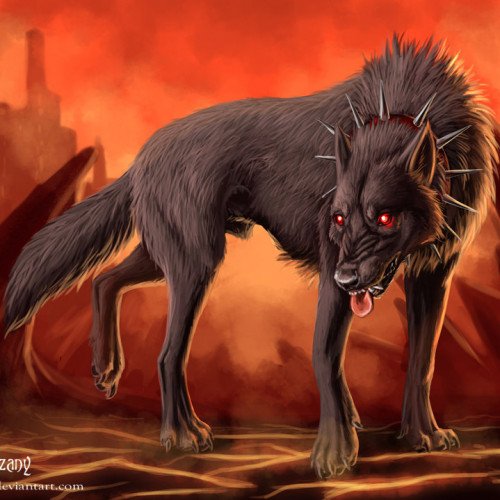 A hellhound is a supernatural dog in folklore. A wide variety of ominous or hellish supernatural dogs occur in mythologies around the world. Features that have been attributed to hellhounds include mangled black fur, glowing red eyes, super strength and speed, ghostly or phantom characteristics, and a foul odor. Certain European legends state that if someone stares into a hellhound's eyes three times or more, that person will surely die. In cultures that associate the afterlife with fire, hellhounds may have fire-based abilities and appearance. They are often assigned to guard the entrances to the world of the dead, such as graveyards and burial grounds, or undertake other duties related to the afterlife or the supernatural, such as hunting lost souls or guarding a supernatural treasure. In European legends, seeing a hellhound or hearing it howl may be an omen or even a cause of death. They are said to be the protectors of the supernatural, guarding the secrecy of supernatural creatures, or beings, from the world.Some supernatural dogs, such as the Welsh Cŵn Annwn, were regarded as benign, but encountering such hellbeasts was still considered a sign of imminent death.