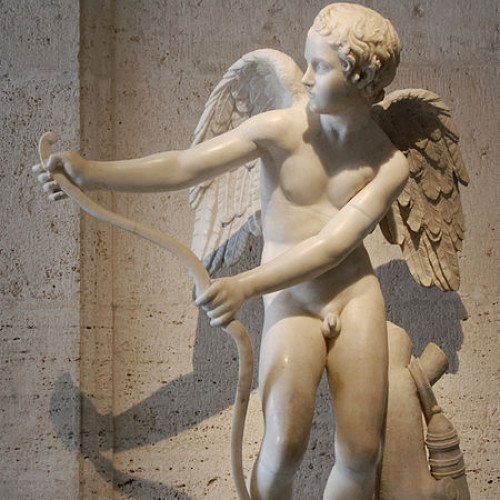 In classical mythology, Cupid (Latin Cupīdō [kʊˈpiːdoː], meaning "passionate desire") is the god of desire, erotic love, attraction and affection. He is often portrayed as the son of the love goddess Venus and the god of war Mars. He is also known in Latin as Amor ("Love"). His Greek counterpart is Eros. Although Eros is generally portrayed as a slender winged youth in Classical Greek art, during the Hellenistic period, he was increasingly portrayed as a chubby boy. During this time, his iconography acquired the bow and arrow that represent his source of power: a person, or even a deity, who is shot by Cupid's arrow is filled with uncontrollable desire. In myths, Cupid is a minor character who serves mostly to set the plot in motion. He is a main character only in the tale of Cupid and Psyche, when wounded by his own weapons, he experiences the ordeal of love. Although other extended stories are not told about him, his tradition is rich in poetic themes and visual scenarios, such as "Love conquers all" and the retaliatory punishment or torture of Cupid. His powers are similar, though not identical, to Kamadeva the Hindu god of human love. In art, Cupid often appears in multiples as the Amores, or amorini in the later terminology of art history, the equivalent of the Greek erotes. Cupids are a frequent motif of both Roman art and later Western art of the classical tradition. In the 15th century, the iconography of Cupid starts to become indistinguishable from the putto. Cupid continued to be a popular figure in the Middle Ages, when under Christian influence he often had a dual nature as Heavenly and Earthly love. In the Renaissance, a renewed interest in classical philosophy endowed him with complex allegorical meanings. In contemporary popular culture, Cupid is shown drawing his bow to inspire romantic love, often as an icon of Valentine's Day. 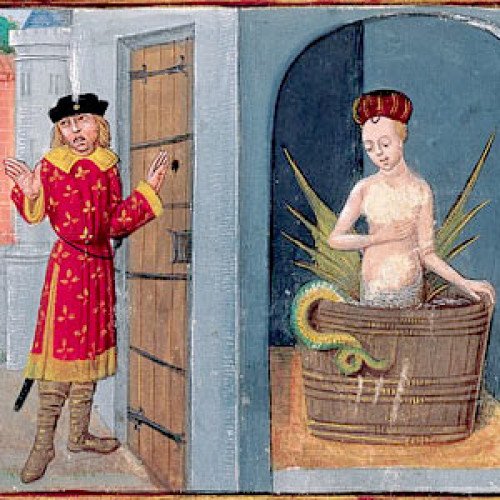 Melusine (French: [melyzin]) or Melusina is a figure of European folklore and mythology, a female spirit of fresh water in a sacred spring or river. She is usually depicted as a woman who is a serpent or fish from the waist down (much like a mermaid). She is also sometimes illustrated with wings, two tails, or both. Her legends are especially connected with the northern and western areas of France, Luxembourg, and the Low Countries. The House of Luxembourg (which ruled the Holy Roman Empire from AD 1308 to AD 1437 as well as Bohemia and Hungary), the House of Anjou and their descendants the House of Plantagenet (kings of England) and the French House of Lusignan (kings of Cyprus from AD 1205–1472, and for shorter periods over Armenia and Jerusalem) are said in folk tales and medieval literature to be descended from Melusine. One tale says Melusine herself was the daughter of the fairy Pressyne and king Elinas of Albany (now known as Scotland). Melusine's mother leaves her husband, taking her daughters to the isle of Avalon after he breaks an oath never to look in at her and her daughter in their bath. The same pattern appears in stories where Melusine marries a nobleman only after he makes an oath to give her privacy in her bath; each time, she leaves the nobleman after he breaks that oath. Shapeshifting and flight on wings away from oath-breaking husbands also figure in stories about Melusine. According to Sabine Baring-Gould in Curious Tales of the Middle Ages, the pattern of the tale is similar to the Knight of the Swan legend which inspired the character "Lohengrin" in Wolfram von Eschenbach's Parzival.