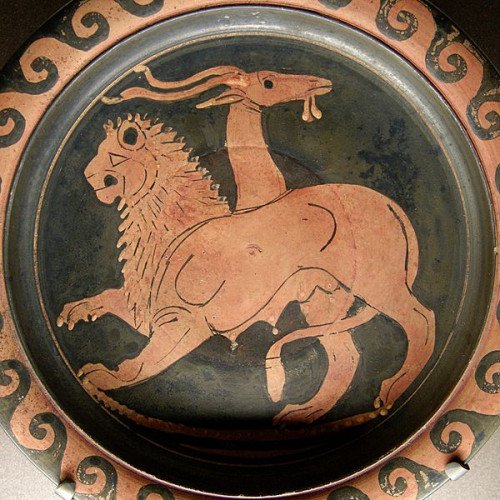 The Chimera ( or , also Chimaera (Chimæra); Greek: Χίμαιρα, Chímaira "she-goat"), according to Greek mythology, was a monstrous fire-breathing hybrid creature of Lycia in Asia Minor, composed of the parts of more than one animal. It is usually depicted as a lion, with the head of a goat protruding from its back, and a tail that might end with a snake's head. It was one of the offspring of Typhon and Echidna and a sibling of such monsters as Cerberus and the Lernaean Hydra. The term "chimera" has come to describe any mythical or fictional creature with parts taken from various animals, to describe anything composed of very disparate parts, or perceived as wildly imaginative, implausible, or dazzling. 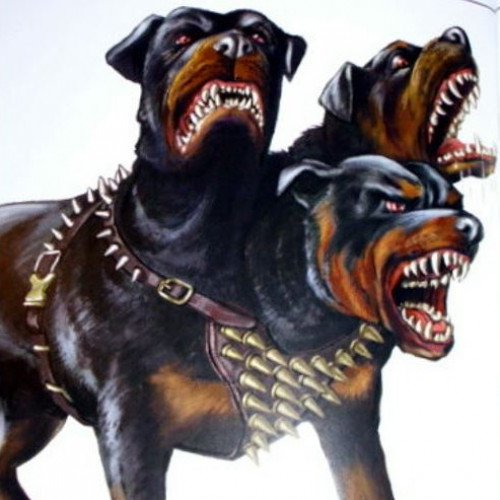 In Greek mythology, Cerberus (; Greek: Κέρβερος Kérberos [ˈkerberos]), often referred to as the hound of Hades, is a multi-headed dog that guards the gates of the Underworld to prevent the dead from leaving. He was the offspring of the monsters Echidna and Typhon, and was usually described as having three heads, a serpent for a tail, and snakes protruding from multiple parts of his body. Cerberus is primarily known for his capture by Heracles, one of Heracles' twelve labours.