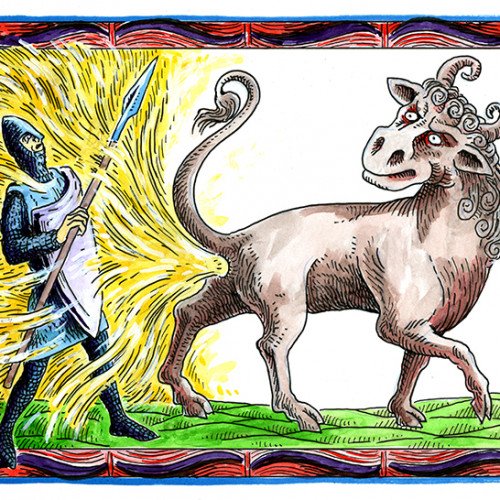 The bonnacon (also called bonasus or bonacho) is a legendary creature described as a bull with inward-curving horns and a horse-like mane. Medieval bestiaries usually depict its fur as reddish-brown or black. Because its horns were useless for self-defense, the bonnacon was said to expel large amounts of caustic feces from its anus at its pursuers, burning them and thereby ensuring its escape. 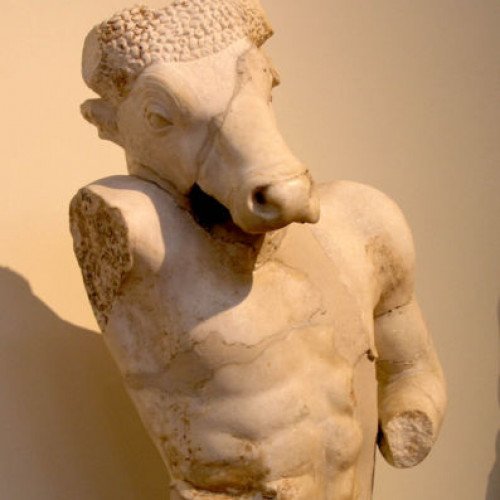 In Greek mythology, the Minotaur ( MY-nə-TOR, MIN-ə-TOR, US: MIN-ə-TAR, -⁠oh-; Ancient Greek: Μινώταυρος [miːnɔ̌ːtau̯ros]; in Latin as Minotaurus [miːnoːˈtau̯rʊs]) is a mythical creature portrayed in Classical times with the head and tail of a bull and the body of a man or, as described by Roman poet Ovid, a being "part man and part bull". He dwelt at the center of the Labyrinth, which was an elaborate maze-like construction designed by the architect Daedalus and his son Icarus, on the command of King Minos of Crete. The Minotaur was eventually killed by the Athenian hero Theseus.