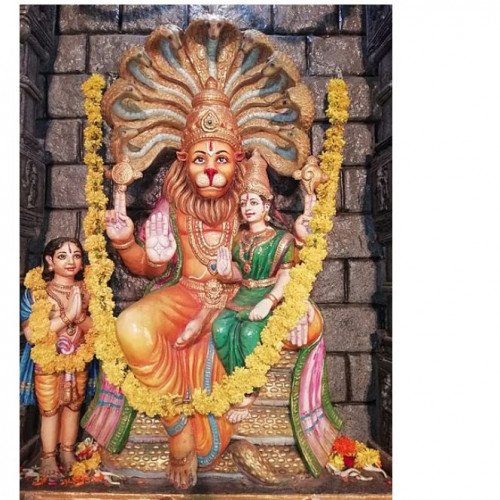 Narasimha (Sanskrit: नरसिंह, IAST: Narasiṃha, ISO: Narasiṁha, lit. man-lion) is a fierce avatar of the Hindu god Vishnu, one who incarnates in the form of part lion and part man to destroy evil and end religious persecution and calamity on Earth, thereby restoring Dharma.Narasimha iconography shows him with a human torso and lower body, with a lion face and claws, typically with a demon Hiranyakashipu in his lap whom he is in the process of killing. The demon is the powerful brother of evil Hiranyaksha who had been previously killed by Vishnu, who hated Vishnu for killing his brother. Hiranyakashipu gains special powers by which he could not be killed during the day or night, inside or outside the house, any place in the world i.e. neither in sky nor on land nor in heaven nor in pataala, by any weapon, and by man, god, asura or animal. Endowed with new powers, Hiranyakashipu creates chaos, persecutes all devotees of Vishnu including his own son. Vishnu understands the demon's power, then creatively adapts into a mixed avatar that is neither man nor animal and kills the demon at the junction of day and night, inside and outside. Narasimha is known primarily as the 'Great Protector' who specifically defends and protects his devotees from evil. The most popular Narasimha mythology is the legend that protects his devotee Prahlada, and creatively destroys Prahlada's demonic father and tyrant Hiranyakashipu.Narasimha is one of the major deity of Hare Krishna (ISKCON) devotees. Narasimha legends are revered in Vaikhanasas, Sri Vaishnavism, Madhwa Brahmins but he is a popular deity beyond these Vaishnava traditions such as in Shaivism. He is celebrated in many regional Hindu temples, texts, performance arts and festivals such as Holika prior to the Hindu spring festival of colors called Holi. The earliest representation, dating back to the 4th-century CE, of Narasimha is from Kondamotu in Coastal Andhra. Other older known artworks of Narasimha have been found at several sites across Uttar Pradesh and Andhra Pradesh, such as at the Mathura archaeological site. These have been variously dated between 2nd and 4th-century CE. 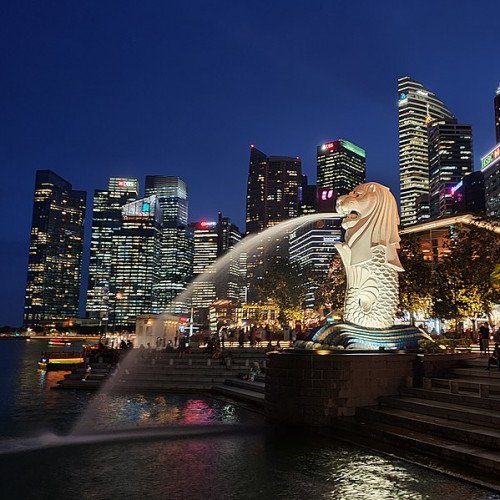 The Merlion () is the national symbol of the city-state of Singapore. It is depicted as a mythical creature with a lion's head and the body of a fish. Being of prominent symbolic nature to Singapore and Singaporeans in general, it is widely used to represent both the country and its people in sports teams, advertising, branding, tourism and as a national personification and patriotic emblem of the Singaporean nation.The Merlion was first used in Singapore as the logo for the tourism board. Its name combines "mer", meaning the sea, and "lion". The fish body represents Singapore's origin as a fishing village when it was called Temasek, which means "Sea Town" in Javanese. The lion head represents Singapore's original name—Singapura—meaning "Lion City". The symbol was designed by Alec Fraser-Brunner, a member of the Souvenir Committee and curator of the Van Kleef Aquarium, for the logo of the Singapore Tourism Board (STB) which was in use from 1964 to 1997, and has been a trademarked symbol since 1966. Although the STB has since changed their logo in 1997, the STB Act continues to protect the Merlion symbol. Approval must be received from STB before it can be used. The Merlion appears frequently on STB-approved souvenirs.