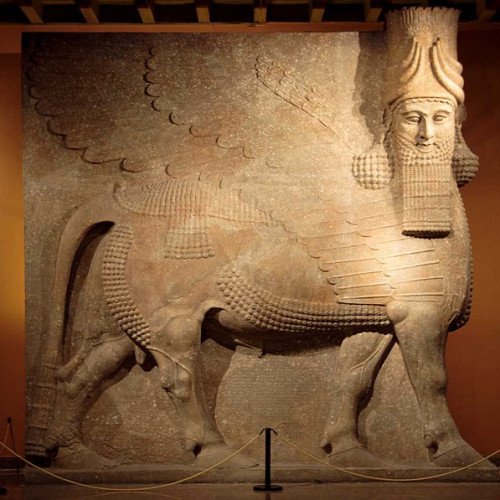 Lama, Lamma or Lamassu (Cuneiform: 𒀭𒆗, an.kal; Sumerian: dlammař; later in Akkadian: lamassu; sometimes called a lamassus) is a Sumerian protective deity. Initially depicted as a female deity in Sumerian times, when it was called Lamma, it was later depicted from Assyrian times as a hybrid of a human, bird, and either a bull or lion—specifically having a human head, the body of a bull or a lion, and bird wings, under the name Lamassu. In some writings, it is portrayed to represent a female deity. A less frequently used name is shedu (Cuneiform: 𒀭𒆘, an.kal×bad; Sumerian: dalad; Akkadian, šēdu), which refers to the male counterpart of a lamassu. Lamassu represent the zodiacs, parent-stars or constellations. 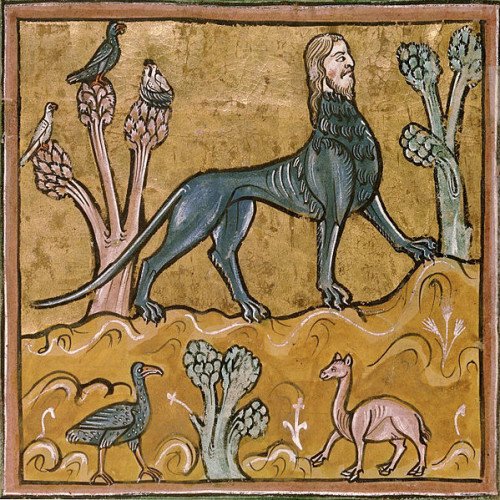 The manticore or mantichore (Early Middle Persian: merthykhuwar; Persian: مردخوار‎ mardykhor) is a Persian legendary creature similar to the Egyptian sphinx that proliferated in western European medieval art as well. It has the head of a human, the body of a lion and a tail of venomous spines similar to porcupine quills, while other depictions have it with the tail of a scorpion. There are some accounts that the spines can be shot like arrows, thus making the manticore a lethal predator. It devours its prey whole, using its triple rows of teeth, leaving no traces of its victims (including bones) behind. Some sources identify the manticore with the mantyger, while others regard the mantyger as a quite different creature.