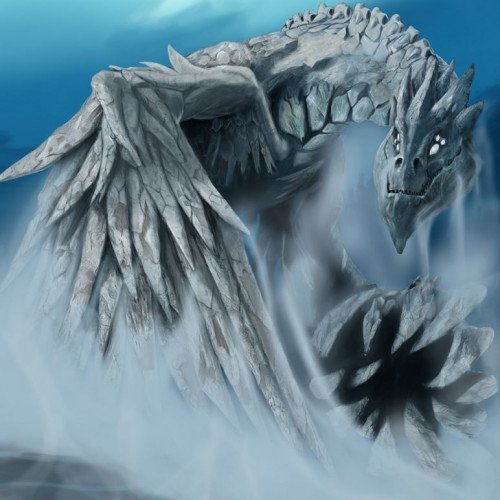 Minokawa is a giant, dragon-like bird in Philippine legends. Early people believed this creature is so big that it can swallow (or cover) the sun to explain the occurrence of eclipses. It is even described as a giant bird named Minokawa that lives in outer space which can devour the sun and the moon, and would try to do the same with the earth.In a Bagobo tale, the Minokawa is a bird as large as an island. Its feathers are those of sharp swords, the eyes reflect like mirrors, its beak and legs are like steel. It lives "outside the sky, at the eastern horizon". While the Baua lived "above the sky" because the Visayans believe that there is a cave called "calulundan" above the sky, the entrance covered by blue smoke. 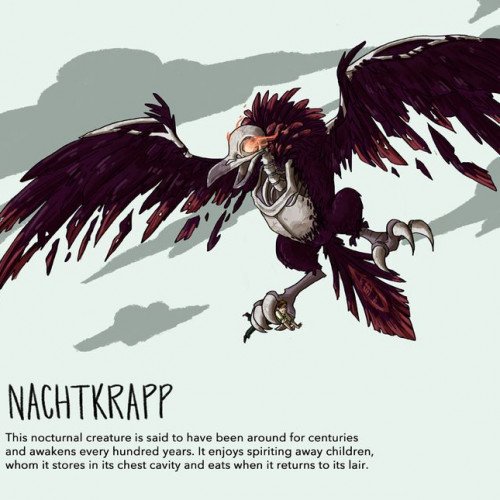 Several versions of the Nachtkrapp exist. In most legends, the Nachtkrapp is described as a giant, nocturnal raven-like bird. In Norse mythology, the, Nachtkrapp (Swedish "Nattramnen", Norwegian "Nattravnen") is depicted with no eyes which if looked into cause death. It is also depicted with holes in its wings which cause illness and disease if looked at. Some of the most common legends claim that the Nachtkrapp leaves its hiding place at night to hunt. If it is seen by little children, it will abduct them into its nest and messily devour them, first ripping off their limbs and then picking out their heart. According to other legends, the Nachtkrapp will merely put children in his bag and take them away. Tales about the Wütender Nachtkrapp (German, lit. "angry night raven") are less common. Instead of abducting children, it simply crows loudly and flutters its wings, until the children have been terrorized into silence. The Guter Nachtkrapp (German, lit. "good night raven") is a rare benevolent version of the Nachtkrapp tale. In Burgenland myths, this bird enters the children's room and gently sings them to sleep.