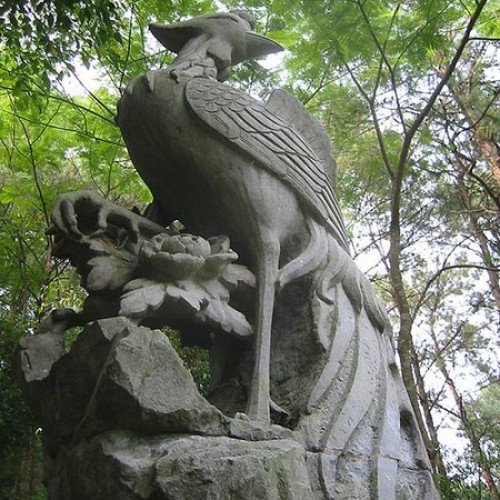 Fenghuang (simplified Chinese: 凤凰; traditional Chinese: 鳳凰; pinyin: fènghuáng) are mythological birds found in Sinospheric mythology that reign over all other birds. It is known under similar names from various languages (Vietnamese: Phượng hoàng or Phụng hoàng; Japanese: Hō-ō or Hou-ou or Ho-Oh; Korean: Bonghwang). The males were originally called feng and the females huang but such a distinction of gender is often no longer made and they are blurred into a single feminine entity so that the bird can be paired with the Chinese dragon, which is traditionally deemed male. The fenghuang is also called the "August Rooster" (鹍鸡; 鶤雞 or 鵾雞; yùnjī or kūnjī; yün4-chi1 or k'un1-chi1) since it sometimes takes the place of the Rooster in the Chinese zodiac.[citation needed] In the Western world, it is commonly called the Chinese phoenix or simply Phoenix, although mythological similarities with the Western phoenix are superficial. 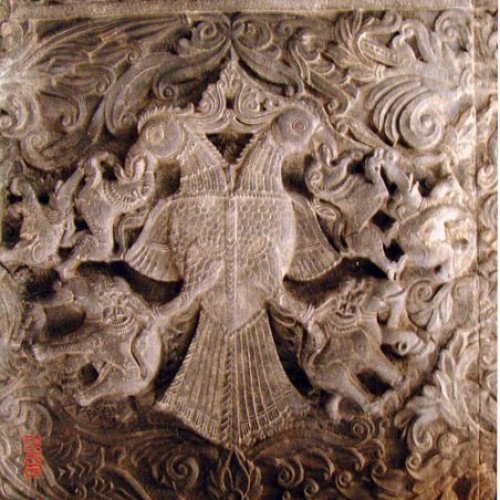 The Gandaberunda or Berunda (Kannada: ಗಂಡಭೇರುಂಡ gaṇḍabheruṇḍa), or Bheruṇḍa (Sanskrit: भेरुण्ड, lit. terrible) is a two-headed bird in Hindu mythology, believed to possess immense magical strength. It is an avatar of Lord Vishnu to fight Lord Sharabha, who in-turn was an avatar of Lord Shiva and had the mission of stopping Narasimha, Vishnu's lion avatar. It was the emblem of the erstwhile Kingdom of Mysore under the Wodeyar kings, and after India attained independence, it was retained by Mysore state as its emblem. That state was enlarged in 1956 and renamed Karnataka in 1973, and the Gandabherunda continues to be the official state emblem of Karnataka. It is used as the official emblem of the Karnataka state government because it is a symbol of strength. It is believed to be capable of fighting the forces of destruction. It appears as an intricately carved sculpture motif in Hindu temples.