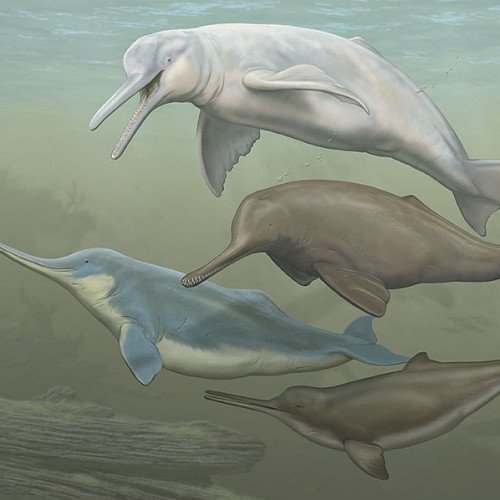 River dolphins are a polyphyletic group of fully aquatic mammals that reside exclusively in freshwater or brackish water. They are an informal grouping of dolphins, which itself is a paraphyletic group within the infraorder Cetacea. Extant river dolphins are placed in two superfamilies, Platanistoidea and Inioidea. They comprise the extant families Platanistidae (the Indian dolphins) (Old World family), Iniidae (the Amazonian dolphins) and Pontoporiidae (the brackish dolphins) (New World families). There are five extant species of river dolphins. River dolphins, alongside other cetaceans, belong to the clade Cetartiodactyla, with even-toed ungulates, and their closest living relatives the hippopotamuses, from which they diverged about 40 million years ago. River dolphins are relatively small compared to other dolphins, having evolved to survive in warm, shallow water and strong river currents. They range in size from the 5-foot (1.5 m) long South Asian river dolphin to the 8-foot (2.4 m) and 220-pound (100 kg) Amazon river dolphin. Several species exhibit sexual dimorphism, in that the males are larger than the females. They have streamlined bodies and two limbs that are modified into flippers. River dolphins use their conical-shaped teeth and long beaks to capture fast-moving prey in murky water. They have well-developed hearing that is adapted for both air and water; they do not really rely on vision since the water they swim in is usually very muddy. These species are well-adapted to living in warm, shallow waters, and, unlike other cetaceans, have little to no blubber. River dolphins are not very widely distributed; they are all restricted to certain rivers or deltas. This makes them extremely vulnerable to habitat destruction. River dolphins feed primarily on fish. Male river dolphins typically mate with multiple females every year, but females only mate every two to three years. Calves are typically born in the spring and summer months and females bear all the responsibility for raising them. River dolphins produce a variety of vocalizations, usually in the form of clicks and whistles. River dolphins are rarely kept in captivity; breeding success has been poor and the animals often die within a few months of capture. As of 2015, there were only four river dolphins in captivity. 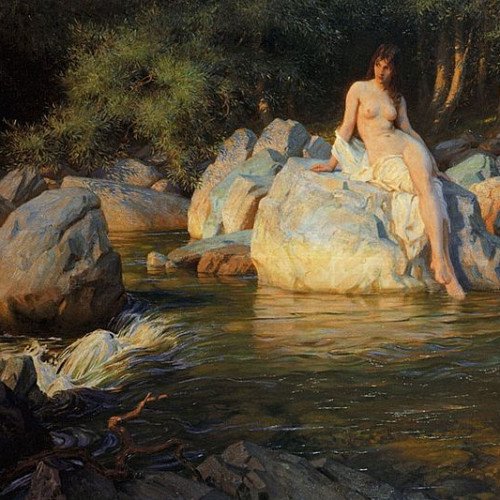 A kelpie, or water kelpie, is a shape-shifting spirit inhabiting lakes in Scottish folklore. It is a Celtic legend; however, analogues exist in other cultures. It is usually described as a black horse-like creature, able to adopt human form. Some accounts state that the kelpie retains its hooves when appearing as a human, leading to its association with the Christian idea of Satan as alluded to by Robert Burns in his 1786 poem "Address to the Devil". Almost every sizeable body of water in Scotland has an associated kelpie story, but the most extensively reported is that of Loch Ness. Parallels to the general Germanic neck or nixie and the Scandinavian bäckahäst have been observed. More widely, the wihwin of Central America and the Australian bunyip have been seen as counterparts. The origins of narratives about the creature are unclear but the practical purpose of keeping children away from dangerous stretches of water and warning young women to be wary of handsome strangers has been noted in secondary literature. Kelpies have been portrayed in their various forms in art and literature, including two 30-metre-high (100 ft) steel sculptures in Falkirk, The Kelpies, completed in October 2013.